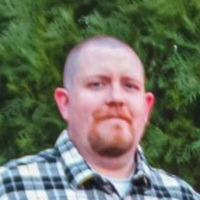 The funeral for Chad Eric Williams, 36 year-old Enid resident is Wednesday, August 26, 2020 at 11:00AM at North Garland Church of Christ. Pastor John Russell officiating. Arrangements are under the direction of Henninger-Hinson Funeral Home. He will be cremated at a later date, per his wishes. The family requests that attendees wear their OU colors.

Chad was born May 28, 1984 in Enid to Mark and Patricia (Atkinson) Williams and died Friday, August 21, 2020 at his home in Enid. Chad attended local schools and graduated from Enid High School with the class of 2003.

On June 24, 2006, he married Chelsea Lynn Coleman at North Garland Church of Christ and made their home in Enid. Chad worked with Cintas for 6 and a half years. He was a huge OU fan. Chad enjoyed wood-crafting, antiquing,  playing x-box, and spending time with his family and friends.