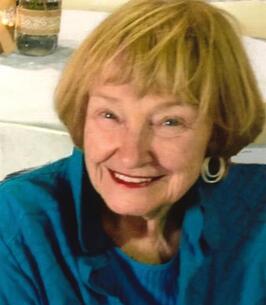 A Graveside service for Chalene Gae Nelson, age 89, of Enid, will be 10:00 am, Saturday, August 13, 2022 at Memorial Park Cemetery with Reverend Jim Edmison officiating. Funeral arrangements are under the direction of Ladusau-Evans Funeral Home.

Charlene was born November 1, 1932 to Fay and Wanda (Robinson) Cake in Glendale, California, and passed away Sunday, August 7, 2022 in Enid, Oklahoma.

Charlene attended San Pedro, California schools through the 8th grade. After World War II, the family moved to a farm north of Hunter. She graduated high school in 1950 and then married Don Nelson on June 29, 1950. They were married 67 years until his passing in 2017.

Charlene was a member of the Hunter United Methodist Church where she served as a Sunday school teacher and Bible School teacher. She remained an active member of the Hunter UMC and Hunter United Methodist Women even after moving to Enid in 1997. She assisted her children with their 4-h and FFA projects, attended her grandchildren and great-grandchildren’s athletic events with enthusiasm, and thoroughly enjoyed skyping with her out of state grandkids.

Her husband of 67 years, Don Nelson, precedes her in death.

Her husband of 67 years, Don Nelson, precedes her in death.

The family would like to express their deep appreciation to the staff of the Arbors and Hospice Circle of Love for their care and concern.

Memorial contributions in Charlene’s name may be made to the Hunter United Methodist Church with Ladusau-Evans Funeral Home serving as custodian of the funds.