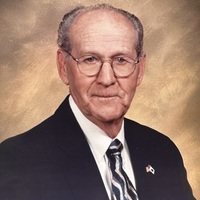 Charles E. Dunson, 87 of Enid, received his wings on January 21,
2023. Charles passed peacefully surrounded by his family. The
service for Charles will be Wednesday Jan 25, at Henninger-
Hinson Funeral Home at 2:00 pm. Gene Ohls will officiate
services.
Charles was born on April 6, 1935 in Waynesboro, TN to Charles
and Mary Alice (Vickery) Dunson. He had seven brothers and six
sisters. He is survived by one brother and one sister, Buddy and
Tootsie Dunson.
Charles proudly served his country as a Sergeant in the US
Army. Charles was a 32 nd degree Mason and began this track in
Helena, AR, Lafayette, LA, and then in Enid, OK in Lodge 501.
Charles belonged to Calvary Baptist where he served as a
deacon. Charles was a conversationalist with everybody and
never met a stranger.
Charles married Margarete Carlisle on April 16 th , 1957 and that
marriage has lasted for 64 years. There were five children from
this union Teresa Carol Scott, Peggy Dunson-Bower, Charles
Daniel Dunson, and twin sons Ronald and Donald Dunson.
Charles, affectionately known as “Pap” by his family, is a
grandfather to five David Lee Weaver, Kimberly Johnson,
Chelsea Davis, Logan Dunson, Nicholas Tocco, and a great
grandfather to ten.
Charles was an avid outdoorsman. Charles was talented,
creative inventive, and often used these skills for family and
friends.