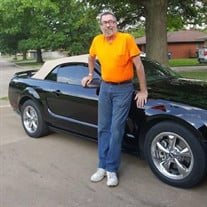 Celebration of Life Service for Dan Fales, 68 of Enid, will be 2:00 PM, Friday June 25, 2021 at Willow View United Methodist Church with Reverend Mark McAdow officiating. Inurnment will follow in Memorial Park Cemetery under the direction of Anderson-Burris Funeral Home and Crematory.

He graduated from Carrier High School in 1970 and attended Northern Oklahoma State, Oklahoma State University and Northwestern Oklahoma State University. Following college, Dan started working at Western as a mechanic in Woodward. He enjoyed working on automobiles and trucks. Dan moved to Louisiana for several years, before moving back to Enid. He was a pumper in the oilfield before working at Mack Truck as a purchaser. Dan married Joyce Bailey on June 7, 2003 in Kremlin and they made their home in Enid.

Dan was a member of Willow View Methodist Church and Kremlin Lions Club. He loved cars especially his Mustang that he took his granddaughters for fast rides. After retirement, Dan enjoyed taking afternoon naps with his white kitty, Betty White.

He was preceded in death by his parents, brother, Darrel Fales, and brother-in-law, Bob Lamberti.

Memorials may be made through Anderson-Burris to Leonardo’s or Willow View United Methodist Church.