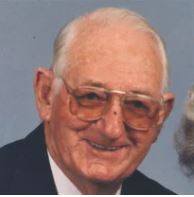 Don was born November 23, 1925 in Glen Rose, Oklahoma to Roy Alvin and Ruth (Wyckoff) Edmonds and passed away on Wednesday, September 23, 2020 in Enid. He was a veteran of the U.S. Army serving in WWII in both the European and Pacific Theater.

On February 23, 1950 Don married Edna Louise Massie in Garber and they made their home in Enid, where they attended Calvary Chapel Church. He loved the outdoors and was an avid hunter and fisherman. He was a member of the American Legion and the Masons Masonic Lodge #80 for sixty years.

Don is survived by his sons Jimmie Edmonds of Enid, and Bill and wife Heather Edmonds of Lahoma; 2 grandchildren Stacey and Craig Edmonds; 4 great grandchildren; and his sister Ruth Mary Westmier of Del City.

He was preceded in death by his parents and his wife Edna in 2015.