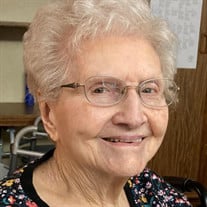 Emma Louise Rikli was born July 26,1926 to her parents Ira and Masel Fyffe, on the family farm home place northeast of Ames, OK in Major County. She attended Forrest Home school not far from their home till after the 8th grade and then began to attended Ames High School where she graduated from in 1944. Working at a very young age on the farm she helped with milking the cows, tending the garden plus the other animals and everything else she could do and then some, learning her great work ethics early in life. After high school she moved to Enid and began working in retail. July 30 in 1947 she married Eldon Rikli from Drummond. They lived in Enid and enjoyed apartment life an, working different jobs and going to movies, making new friends. Soon after they moved to Drummond and in 1949, their family began first with the birth of Donald, then Margaret, and then Jane. After a few years they moved to the family-owned farm south of Drummond where they began farming, adding another girl, Mary Jo and later a son, Billy Clyde.

Emma helped Eldon on the farm and as a mother of 5 children she was always busy cooking and baking plus raising her own chickens to butcher and selling eggs besides attended church and all the school functions their kids were involved in, and she belonged to a local woman's club. She also was a den mother for cub scouts, and chauffer for the kids or running to parts stores for Eldon, she also sewed clothing for the family and every summer she repainted every room in the house. Emma was always available to send meals to neighbors and friends that were sick or had surgery or lost a loved one.

They moved north a couple miles after a tornado damaged their home in April of 1970, and then as Eldon took on more farm ground with all the kids in school or done, Emma would return to working in Enid during the winters. Some of the businesses she worked for are Herzberg's Fabric, Newmans Department Store and, she was a manager of a Braum's Ice Cream store. She had a car wreck in the fall of 1972, that ending her working in the public but, Emma and Eldon's aging parents were needing more help plus grandkids were beginning to show up. They enjoyed watching their children and grandchildren and great grandchildren making their ways in life plus they started doing some traveling. Countless trips across the states to numerous country music concerts and visiting family plus they attended Eldon's army reunions having enjoyable times with Eldon's comrades and Emma meeting them and befriending their spouses. They soon retired from farming and moved to Grove Oklahoma enjoying the Grand Lake way of life for 5 years, then moved back to Enid in 1988, to be closer to family. As they got older, they moved in May of 2009 into the Burgandy Senior Apartments of Enid. After 62 years of marriage Eldon passed away in January of 2010 then soon after Emma moved to Drummond once again residing with a daughter and her husband till her health declined after time went on and she needed more care she moved to The Greenbrier Homes in October 2021. She passed away June 21, 2022, in Enid, just a month shy of her 96th birthday. Her sharing her growing up and through all her years of stories of her and Eldon's lives, her laughter, her smile, her humor, and the sparkle of her eyes will be missed by those she's leaving behind.... Daughter Jane Kimball, son Billy Clyde and his wife, Deanne, daughter Mary Jo and her husband Danny Fleer and brother-in-law Randy Dick. Also, Emma has 8 grandkids, 21 great grandkids and 2 great great grandkids and numerous nephews, nieces, and many special friends that she also loved.

She is proceeded in death by Eldon and his parents Albert and Bessie Rikli, her parents Ira and Masel Fyffe, her siblings Ruby DeHaas, RJ Fyffe, and Kathleen Reim. Eldon's and Emma's son Donald Rikli and their daughter Margaret Dick.