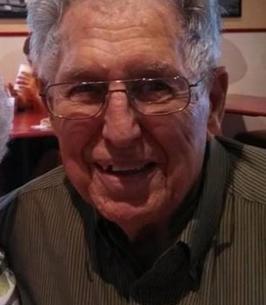 Everett Eugene Ohls was born May 8, 1928 in Covington, OK and departed for glory from Enid, OK on August 31, 2020. Everett was the second son born to Guy Clifford Ohls and Ruth Ohls and grew up in the home of Guy and Henrietta Ohls. Everett received his new birth in Jesus Christ in March of 1935. A few years later at the First Baptist Church of Sasakwa he met a young lady named Evelyn Glover who captured his heart. Everett graduated from Sasakwa High School in May 1946 and joined the United States Navy the next week, serving from May 1946 until his discharge in February of 1948. Everett and Evelyn were wed on August 7, 1948; beginning a journey together that would last over 70 years. He was ordained as a deacon at Oak Grove Baptist Church in Oklahoma City on December 18, 1949.
Everett and Evelyn lived in Oklahoma City after their marriage, moved to Del City in 1950 where all four of their children were born, and then moved to Enid in 1964. Everett led his family to actively participate in the Calvary Baptist Church, Enid where he served as a deacon, Sunday School director, choir member, and numerous other roles. He was never an idle man! He worked for Champlin Petroleum Company from 1948-1985 (37 years) on the pipeline, as a dispatcher, and then as a gauger, and whatever else was needed. He could be found at businesses around town or around the downtown square hanging canvas awnings for Clark Canvas Company. After Champlin closed down he worked for Williams Pipeline in their pump station here in Enid while he and his oldest son were establishing Double E Custodial Service which he helped operate from 1985-1993.
Dad loved the roar of engines and operated the Enid Speedway from 1967-1972 along with his cousin (partner in crime) and lifelong friend Jim Powell. After separating himself from the track operations he couldn’t stay away and continued to work with the pit staff and stayed connected to his racing family, even serving as the track chaplain for several years until finally retiring in 1990. Dad saw the deep spiritual needs of those he worked with in the oilfield and around the race track; he wanted to show them the love of Jesus that he experienced and he worked to overcome his fears and sense of inadequacy as he learned to share his faith. Everett worked hard, he prayed hard, and he loved hard.
He enjoyed camping with his family for two weeks during the summers at the National Park in Sulphur, Oklahoma and every few years taking a trip to some other area; driving to California to see his brother Cliff and his family (and stopping along the way at every imaginable place!) or driving to see his sister Belle and her family by first going to the southwestern corner of South Dakota to see the Badlands, Black Hills, and Mt. Rushmore then driving to the northeast corner of North Dakota to reach his destination! Vacationing in Red River, New Mexico with friends while exploring the mountains and taking in majestic views and brisk air. He loved his family and wanted to spend time with them.
Everett was a prayer warrior. He prayed for his family members, he prayed for his wife, he prayed for his church family, he prayed for his pastors and church staff members. He prayed for those who did not know Christ. Chances are, if you knew Everett and ever went through a rough patch or a difficult season he prayed for you. Everett served Calvary Baptist Church in a multitude of different roles throughout the 56 years he was a part of this congregation; perhaps none more endearing than the role he fulfilled from 1990-2017 as he ministered in the hospitals, nursing facilities, and in the homes of shut-ins. For 27 years Dad had a congregation that loved his constant, loving attention. He struggled to give up that ministry, but as Momma’s need for assistance and care grew greater that decision was quickly and easily made because Everett was a man of his word. He had made a vow to love, honor, and cherish until death parted him from his beloved Evelyn and he was determined to fulfill that vow. He gave her his undivided attention until she went home to be with her Lord on November 18, 2018. From the day of her funeral on November 21, 2018 until August 31 he longed to be reunited with her. Now he is.
Everett was preceded in death by his parents; by his brother Clifford Ohls, one sister Autumn Rae Ohls, and his wife Evelyn Ohls.
Everett is survived by his two sisters Belle Jore (Thelmer) of Grand Forks, ND and Naomi Miles of Arlington, TX.
His children: daughters Jan Campbell (Larry) of Oskaloosa KS and Sandy Wallace (Ed) of Broken Arrow OK; sons Gene Ohls (Sandy) of Enid OK and Tim Ohls (Kim) of Wichita KS.