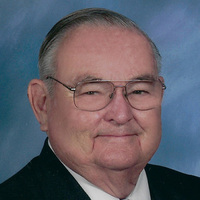 We will be celebrating the life of Frank Henry Bunch, 90, of Enid, at a graveside service only, at 2:00pm, Wednesday, February 24, 2021, in the Memorial Park Cemetery Mausoleum. Services are under the direction of Henninger-Hinson Funeral Home of Enid.

Frank passed away early Friday morning, from natural causes, on February 19, 2021, at Greenbrier Nursing Home. Reverend Tom Stanley, Senior Minister of Central Christian Church, will officiate. Viewing will be 8:00am to 8:00pm on Tuesday, February 23, at the funeral home.

Frank was born October 15, 1930, at Villa Madonna Hospital in Enid, to George Lee and Marjorie Olga (Sayward) Bunch. Frank attended Enid public schools and was a member of the Enid High School class of 1948, the first class to attend EHS after it burned down in the early 1940's.

Frank worked alongside his dad where he learned his trade of being a plumber. He carried on his dad's business, Bunch Plumbing Company, for many years.

Frank joined the National Guard in 1947. His unit was deployed to Woodward after the terrible tornado in 1947. In 1950, Frank's unit was deployed to Korea. Sailing through the Panama Canal, his unit went first to Japan and on to Korea, where he served as chief of an artillery unit and was awarded several medals for his service, including the Army Occupation Medal (Japan), Korean Service Medal with one Bronze Star and the UN Service Medal. In 1953, his unit returned to Fort Sill, OK, where he returned to National Guard status. He continued his military career in the National Guard until his retirement date of October 15, 1990.

Frank and Vera Sue loved camping, boating, and waterskiing, as well as many years of square dancing in several different dance clubs. They enjoyed many miles of traveling together in their motorhomes and campers, including one he converted from an old school bus. Frank was appreciated for his great patience in taking his nephews and nieces waterskiing for hours on end.

Memorials may be made to Central Christian Church of Enid with Henninger-Hinson Funeral Home acting as custodian of the fund.

The family wishes to express their heartfelt thanks to the many caring individuals at Greenbrier Nursing Home for taking such wonderful care of Frank and Vera Sue for the last few years.