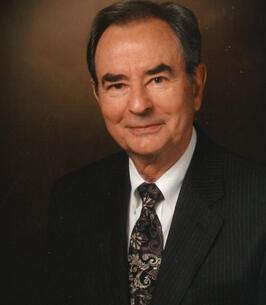 A Celebration of Life service for Gene Brown age 82 of Enid will be 12:30 pm on Monday at Emmanuel Baptist Church with Rev Wade Burleson and Dr. Shonn Keels officiating. A private family burial will be before the service in Memorial Park Cemetery under the direction of Ladusau-Evans Funeral Home.
Gene was born November 11, 1940 in Shamrock, Tx to Wallace and Katherine (Leake) Brown and passed away November 20, 2022 at his home surrounded by his loving wife and family after a long battle with cancer. Gene graduated from Borger High School in 1959 and began working as a terminal manager for Groendyke Transport in Borger. He married Jo Dean Frith on June 12, 1959 and they had three children, Becky, Barbara, and David Brown. They moved to Enid from Amarillo, TX in 1971. He continued to work for Groendyke Transport as Executive Vice President until 2012, retiring after 54 years of service.
He was a talented musician, singer, and played music with his brother Don. He was an avid reader and sports fan. Gene loved the Lord and enjoyed attending church services at Emmanuel Baptist Church and spending time with family. He was also recently awarded for 50 years of service as a 32 Degree Scottish Rite Mason.
Gene is survived by his wife, Jo, daughter Becky Beaudin and husband Chris of Manitou Springs, CO, daughter Barbara Unruh and husband Steve of Enid, and son David Brown and wife Jana of Amarillo, TX, also survived by his loving 10 grandchildren and numerous great grandchildren.
He was preceded in death by his parents, his brother Don Brown and nephew Zane Brown.