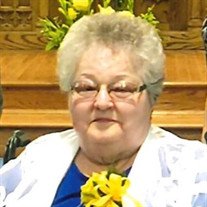 Georgiana grew up near Bison and attended St. Joseph Catholic School in Bison through the 8th grade. She went to high school in Waukomis. Following her graduation from Waukomis High School, she graduated from Enid Business College. On August 1, 1968, Georgiana married Tommy Gungoll at St. Francis Xavier Catholic Church in Enid, where they made their home. Georgiana worked as a secretary for Jim Edsall and Don Collins, CPAs and later for Richard Gau and Pat Novak. She was a homemaker and became the bookkeeper for Plant Patch until her retirement. Georgiana was a member of St. Francis Xavier Catholic Church, Altar Society and Knights of Columbus Auxilliary.

She was preceded in death by her parents; sister, Agnes and husband, Stanley Petru; brother, Frank and wife, Mildred Pospisil; brothers-in-law, Charles Merritt and Bruce Gungoll.

She is survived by her husband, Tommy; son and his wife, Todd and Melisa Gungoll; her pride and joy, grandchildren, Chrissa and Sebastian Gungoll; sister, Alice Merritt; sister-in-law, Jane Gungoll; other relatives and many friends.