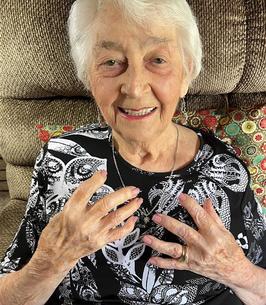 A Mass of Christian Burial for Helen (Morrison) Klein, age 92, of Enid, will be 11:00 am, Tuesday, June 28, 2022 at St. Gregory the Great Catholic Church with Father Mark Mason celebrating Helen’s life. A Rosary will be at 10:00 am, prior to the Funeral Mass, with Deacon Tony Crispo officiating. Burial in Calvary Cemetery will follow under the direction of Ladusau-Evans Funeral Home.

Helen (Morrison) Klein was born in Artesia, New Mexico on March 31, 1930 to Florence and Frank Morrison. After her father’s death in 1935, Florence moved Helen and her sister Patsy to Bison, Oklahoma, to her family home. After moving to Enid, Helen graduated from Memorial High School and attended Phillips University. Helen married Tom Klein on June 2, 1951, and they moved to Biloxi, Mississippi where Tom was serving in the Air Force. While he was stationed overseas, Helen returned to Enid and their first daughter Nancy was born. Upon Tom’s return, they were stationed at Tinker Air Force Base where their second daughter Jenny was born.
The family returned to Enid after Tom’s service ended and welcomed two more daughters, Amy and Kathy. Besides caring for her four girls, Helen sewed extensively. She quipped that “she would rather sew something new than iron what she had.” Helen was also an amazing cook, feeding everyone who came to her home.
During these years, she, Tom and the girls planted the trees in Willow West and Brookside in Enid and landscaped Autry Vo-Tech. Helen loved to square dance, and she and Tom were members of Dudes and Dolls as well as the Big Band Dance Club.
Helen began work as a secretary at Phillips University in 1970 and spent time in the English, Religion and History departments where she was “Mom” to many students.
Helen loved working on the St. Gregory’s Quilters Bazaar with the wonderful women who became dear friends. Helen’s grandchildren enjoyed her ‘great pretends’, delicious cinnamon rolls, “doll dress” angel food cakes and fried chicken.
Helen’s family would like to thank her special helpers, Mary, Shayne, Megan, Letty and JoAnn for their loving care.
Helen is survived by four daughters and their husbands; Nancy and Dwayne Campbell, Jenny and Dave Webster, Amy and John Garrison, Kathy and Rick Fizer, and her sister, Pat Lowe. Helen has nine grandchildren and 19 great-grandchildren who lovingly refer to her as “Ga”.
She is preceded in death by her husband Tom, her mother and father and her great-grandson, Keaton Barron.