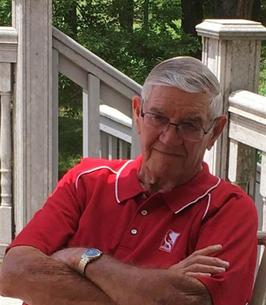 Jack was born March 15, 1936 in Alex, OK to James O. and Mildred B. Felkner Fitzpatrick and passed from this life Tuesday, September 8, 2020 in St. Mary’s Regional Hospital. Although born during the Great Depression, the middle child of James and Mildred was anything but depressing to those who new him. With his quick yet unassuming wit, everyone smiled just a little bigger when around him. Jack grew up in Chickasha, later moving to Edmond where he graduated from Edmond High in 1954. He attended one year at Oklahoma A & M, now known as Oklahoma State University. American by birth and Christian by the grace of God, Jack was honored to serve both his country and his Almighty God. Entering the U.S. Army in 1958, he served 6 years and was honorably discharged in 1964. He was a member of Bethlehem Baptist Church.
Jack married Anita M. Yarger on February 3, 1961 in Oklahoma City. Jack and Anita had one daughter, Renee, and one son, Curtis. After living in Houston, TX, the family moved to Enid in 1966 where he remained until it was time for him to go to his permanent address in Heaven.
Jack worked for several finance companies including Associate Finance Company before finishing his career with First National Bank Hennessey, retiring in 2000 after 15 year as Vice President - Loan Officer.
Left to cherish his memory, his wife Anita of the home, daughter Renee Smith and husband Woody, son Curtis Fitzpatrick and wife Connie both of Stillwater, grandchildren Austin and Erin Fitzpatrick, Chelsea and Skyler Patton, great grandson Theo Fitzpatrick, sister Carol Freeze and husband Ted of Garland, TX, brother Lavaughn Fitzpatrick of Rockwell, TX and numerous other family members and friends.
He is preceded in death by his parents.