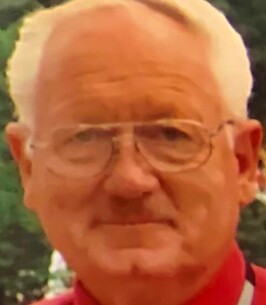 A Celebration of Life of Jackie Joe Wicker will be held 10:00am, Saturday, August 20, 2022 at Enid First Church of the Nazarene with Pastor Lindell Watson officiating. Burial will follow in Douglas Union Cemetery. The family will be at the funeral home to greet friends Friday evening from 6-7pm. Services are under the direction of Ladusau-Evans Funeral Home.
Jackie Joe Wicker was born August 15, 1938 to Carl and Beatrice (Casey) Wicker on the family farm homestead east of Laverne, Oklahoma in a sod house that had no electric lights. The Doctor drove out from his home which was about 4 miles to make the delivery. Jack grew up a farm boy doing farm chores. He attended school in Laverne and after graduation in 1956 he joined the Navy at the age of 17. He spent 4 years in the Navy working as a Personal man and had 3 tours in Japan.
When Jack was 12 years old, he was baptized in the Baptist Church in Laverne, Oklahoma. Jack truly believed God has shown him the way and that many blessings have come his way.
Jack started working at a young age at Mitches Grocery Store and Ideal Food Store in Laverne until he graduated from high school. He also enjoyed working at his uncle Glenn’s “Casey’s”. He served many a hamburger and ice cream.
In August of 1960 he decided to attend Barber School in Amarillo, Texas. Jack also met his future wife, Jo on a blind date that same month in Laverne, Oklahoma. Jack graduated from Barber College in March of 1960 and moved to Guymon, Oklahoma to start his career. On May 21, 1960 Jack and Jo were married at the Midway County Church in Beaver County, Oklahoma.
Jack started his own Barber Shop in 1962 and retired on March 30, 2010 ending a 49- year career of cutting hair in Guymon. Several of his clients were 4 generations and some had been coming to him for 49 years. Besides barbering Jack also worked for Sears setting up household appliances and drove a Guymon school bus.
Jack also was very involved with school activities with his 4 children going as a band sponsor to Washington D.C., Atlanta, Georgia and Kansas City, Kansas with the high school. Jack was band president for several years and was also very involved in Kids Inc., in Guymon. He built the first softball field for girls and helped get lights and bleachers and coaching girls’ softball for many years.
Jack also enjoyed many years of hunting pheasant and quail with his hunting buddies in Guymon. He also very much enjoyed going fishing with Jo and his grandkids the last few years.
Jack joined Guymon Lions in 1973 and right away was put to work. He became president of Guymon Lions Club in 1980-1981 and became District Governor in 1983-1984 making a trip to Hawaii and many other places. He also talked his wife into starting a Lioness Club and also with the help of Guymon Lions organized and started a second Lions Club in Guymon called Panhandle Lions. Many hours were enjoyed traveling for Lions.
Jack and Jo started attending the Church of the Nazarene in Guymon in the 70’s and became active in the church. He really did enjoy greeting at the door, sub teaching, and also started a Saturday morning men’s breakfast get together in the Guymon church.
Jack also always carried a small notebook in his shirt pocket and when he heard something funny or saw something funny happened, he made a note of it for his book. He still likes to tell funny stories. On his 40th year of barbering he decided to write a book and call it “Forty Years Behind the Chair”. He started on it then in April of 2002, we lost our son, Brent so Jack quit writing on it. In 2007 (5 years later) Jo told him he needed to get started on his book again and call it “Forty Years Behind the Chair”. He only lost it once on the computer (about 20 pages) so had to start all over, but finished it and had it published in 2007. Jack loved telling a good joke and as a barber enjoyed visiting with his customers.
In December of 2009 Jack got a surprise when Jo announced she had put their house on the market and 2 weeks later had a contract on it. Plans began since they had lived in their home in Guymon for almost 49 years and raised their 4 children there. On April 1, 2010 they made their final move to Enid. After moving to Enid Jack started cutting hair again at BlueJays Barber Shop. Jack and Jo also became very active members at Enid First Church of the Nazarene.
Jack is survived by his wife of 61 years, Jo; daughter, Dawnya and husband Kurt Sturdivan of Broomfield, CO, Tawnya and husband Don Perrotta of Denver, Co; daughter, Brenda Vertin and husband Brent of Westminster, CO and daughter-in-law, Amy Wicker of Covington, OK; grandchildren, Nick Sturdivan of Broomfield, CO, LaLacia Kane and husband Zack of Mirmar, FL, Kaleah Moates and husband Zac of Blanchard, OK, , Clint Wicker and wife Katlin of Waukomis, OK, Wendy Swart and husband Jared of Broken Arrow, OK, Makenzie Kroll and husband Matt of Stillwater, OK, Kira Wicker of Broken Arrow, OK, , Jack Zimmerman, Alexa and Kyle Vertin of Westminister, CO, Luke Wicker of Covington, OK; great grandchildren, Hunter Moates, of Blanchard, OK, Leigha and Emmalynn Wicker of Waukomis, OK, Myla and Rae Kane of Mirmar, Fl, Blakely and John Brent Swart of Broken Arrow, OK; sister, Glenda Martin of Arnett, OK; brothers, Bill Wicker and wife Sherill of Guymon, OK, Larry Wicker and wife Susan of Laverne, OK; and a host of nieces, nephews and many loving friends.
He is preceded in death by his parents; son, Brent Lee Wicker; grandparents; father and mother-in-law, John and Francis Anderson and sister, Darlene Branstetter.