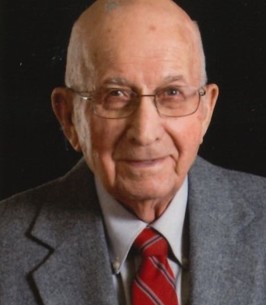 A Celebration of Life Service for James A. “Jim” Reinhart, Jr age 90 of Enid will be 2:00 pm Saturday August 29, 2020 at First Baptist Church with Rev. Kelly Russell and Rev. Jerred Unruh officiating. Burial will follow in the Memorial Park Cemetery under the direction of Ladusau-Evans Funeral Home. Masks are encouraged to be worn due to COVID 19.
Jim was born August 13, 1930 in Seminole, OK to James A. Reinhart, Sr and Agnes Bethel and passed away at his home Thursday, August 27, 2020. He graduated from Wolf High School in 1950. He enlisted in the U.S. Air Force on December 30, 1950 and was honorably discharged on December 29, 1954. Jim married Delma J. Savage on February 27, 1959 in Pawhuska, OK. He worked in the oilfield for Halliburton Services retiring after 30 years. He worked for Wilcoxen Packer & Supply 1986-1992, Midwest Electric 1992-1998, Jay Mor Vending 1998-2000, and for Janzen GMC 2000-2014. He was baptized on November 10, 1968 and was a member of First Baptist Church.
Jim is survived by his wife Delma of the home, daughter Jaymie and husband David Morley, grandson Michael Morley and wife Taryn, sister LaDonna Schneider, God son Clint Frisbie, and sister in law Ramona Savage and several nieces and nephews.
He was preceded in death by his parents and a sister Betty Lou Reinhart, brothers in law Bob Schneider and Jerry Savage.