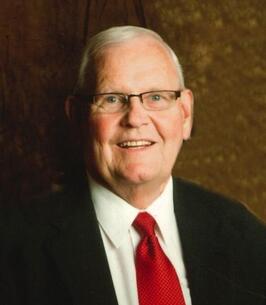 A Celebration of Life Graveside for James E. Tharp, Sr. age 85 of Yukon formerly of Enid and Hardesty, OK will be Friday, August 19th at 10:00 am at the Hartville Cemetery, Hardesty, OK with Pastor Tony Aton officiating. The family will receive friends at the Henson-Novak Funeral Home from 5:00 pm to 7:00 pm Thursday. Arrangements are under the direction of Ladusau-Evans Funeral Home, Enid OK.
James was born August 13, 1937 in Hardesty, OK to James H. and Gladys (Smart) Tharp and passed away August 15, 2022 in the Maple Lawn Manor in Hydro, OK. James grew up in the Hardesty community where he attended and graduated from Hardesty High School in 1955. He married Marie “Kay” Claycomb on August 21, 1957. James started working along with his partner Ed Parsley at Guymon Carpet Store. James and Kay later opened Panhandle Carpet and Tile. They moved to Enid in 1988 where he started his second career as an insurance agent. James was a former member of Davis Park Christian Church where he served as an elder. In 2009, they moved to Piedmont and later to Yukon. He attended the First Baptist Church in Piedmont.
James enjoyed watching his children and later grandchildren in all there sporting events.
James is survived by his wife Kay of the home, children; Debra Hillman and husband Tracy Hillman of Boise, Idaho, Jet Tharp and wife Paula of Custer City, OK, Jeffery Tharp of Yukon, OK, Dena Wiegand and husband Jim Wiegand of Fenton, Michigan, and Jeremy Tharp and wife Lori of Hydro, OK. Eleven grandchildren, ten great-grandchildren, sisters Joy Briggs and husband Ronald of Ulysses, KS and Dixie Tharp of Ulysses, KS and brother Marvin Tharp and wife Diana of Hardesty, OK, sister in laws JoAnn Tharp of Hardesty, Barbara Tharp of Austin, TX and several nieces and nephews.
He was preceded in death by his parents, four brothers; Gerald, Melvin, Don and Darell Tharp.