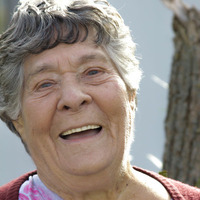 Jessie was born February 13, 1925 in Branch, Missouri to Oliver and Mollie (Cureton) Glor and died Tuesday, November 10, 2020 at St. Mary’s Regional Medical Center.  On August 3, 1943, she married Kenneth “BoBo” Rork in Reno, Nevada. After the war, the couple made their home in the Carrier area. Jessie worked in the cafeteria of Carrier school, at the Lazy H Motel, and was a Central Sterile Technician at St. Mary’s Hospital for many years. She also was the custodian of the United Church of Lahoma up until two years ago.

She was a long-time member of the United Church of Lahoma and a member of the Women’s Circle at church. She enjoyed going to casinos, gardening, bowling, and watching the Thunder play in person or on TV.  She would go every Saturday to watch her son, grandson, and daughter-in-law race.  Most of all, she enjoyed spending time with her family, especially her grandchildren and great-grandchildren.