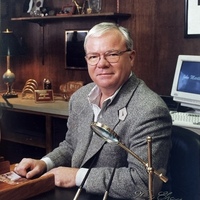 John Kenneth Martin died on December 5, 2022, after years living with Alzheimer’s Disease. He would have opted to have died sooner, but assisted suicide is not an option in Oklahoma. A lifelong resident of Enid, John was born February 26, 1946, the son of Dorothy and Kenneth Martin, and brother of Mary Martin and Kay Martin Ehardt, all deceased.

John graduated from Enid High in 1964 in pursuit of music, playing saxophone. After one boozy freshman Phi Delt semester in Stillwater, John transferred to Phillips University and joined Gridiron. He graduated in 1968 with a business degree, because music isn’t practical (say the parents). Imagine what John’s life would have been if he had pursued music as a career.

After college, John went into the Navy and did three or four tours. He didn’t like to talk about his service during the Vietnam conflict, but he did tell stories about eating monkey brains in the Philippines. He hated being in the military. He hated war. His job was Radioman First Class.

John returned to Enid and worked for his dad at Martin Agency Insurance. John married his first wife, she shall not be named. They had a son, Christopher Martin, in 1975 and then they divorced in 1977. He married Nancy Walker (then Owens) in 1978. She came with two daughters, Romy Owens and Jennifer Owens (now Haines).

After a merger with Dillingham Insurance, John retired from insurance. Something something Sonic. There’s probably something big being left out here… house moves, surgeries, maybe scandals. And then in 2005, a new grandson, Benjamin Walker Haines, and the life of a grandad of leisure began.

John was diagnosed with cognitive impairment in February of 2017, six weeks after Nancy’s death. Prior to his diagnosis, John was active in a lot of stuff. He was a docent and donor at the Cherokee Strip Regional Heritage Museum. John served on many many many boards over the years and sorry to not list them all: CDSA, NOC Board of Regents, NWOSU Board of Regents, Rotary, Ambucs, probably, a bunch of Independent Insurance Agent stuff, some Woodring Airport stuff. He was a pilot, with a single engine plane. He literally flew through a rainbow once. John lived an adventurous forking life. Some people liked him and respected him. Some people didn’t. He knew a lot of people, because Enid.

He had many stories. He was very funny, and sometimes remarkably rude, but thankfully only his sense of humor lasted until the end, because some of the dementia journey was funny.

In lieu of flowers, the family has requested donations be made in his honor to your choice of the following non-profit organizations: Gaslight Theatre, YWCA of Enid, Enid SPCA, Free Mom Hugs, or The Freedom from Religion Foundation.