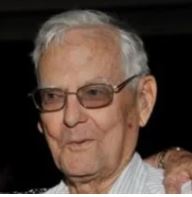 Graveside service for John “Bill” Estill, 98 of Enid, will be Tuesday, September 8, 2020 at 12 noon at Memorial Park Cemetery with Pastor Kelly Cronkhite officiating. Cremation arrangements are under the direction of Anderson-Burris Funeral Home and Crematory.

He grew up in Carrier and graduated from Carrier High School. Bill enlisted in the Army Air Corp and was a pilot during WWII. After his discharge, he returned to Carrier. Bill married Mary Evelyn Bittle on December 4, 1948 in Carrier and they made their home in Enid. He worked for Vater Equipment for 41 years, before his retirement.
Bill was a member of Carrier Congregational Church and enjoyed traveling.

He was preceded in death by his parents, one brother and seven sisters.

Bill is survived by his wife, Mary of the home; children, John Estill and Jane Schanck, both of Enid; four grandchildren, eleven great grandchildren; other relatives and friends.