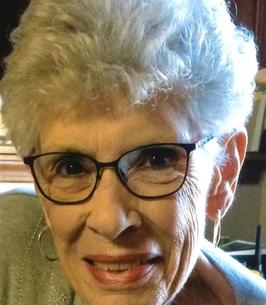 A Memorial Service for Judith Ann Rasp, age 80, of Enid, is 2:00 pm, Monday, June 21, 2021 at Ladusau-Evans Funeral Home Chapel. Funeral arrangements are under the direction of Ladusau-Evans Funeral Home.
Judy was born January 29, 1941 at the Dickinson County Memorial Hospital, Abilene, Kansas, and passed away Thursday, June 10, 2021 at her home in Enid. Her proud parents were Robert C. Menges and Viva O. Menges of Abilene, Kansas.
Judy attended McKinley Grade School, Abilene Junior High and Abilene High School. She was an honor student in grade, middle, and high school being on the appropriate school honor roll throughout her school years. During school Judy was a member of Jobs Daughters, and served as Jobs Queen her Senior Year of high school in 1959.
Judy was also very active in Abilene High class activities; she was class president her junior year, was on the Cowgirls drill team her junior and senior years, was on the Board of Directors for the Biz-Club during her junior and senior years, and participated in Y-teen and Pep Club all four years of high school.
Upon graduation from Abilene High School, Judy worked as a secretary for an investment firm in Abilene. Judy married Charley B. Rasp on June 12, 1960 at the First Christian Church of Abilene. After spending the summer in their apartment in Abilene the couple began life’s journey by moving to Hays, Kansas. Judy worked as a secretary to the Director of Housing at Fort Hays State University while Charley began work on a business degree. During the spring semester of 1963, Judy presented the couple a baby girl, Michelle Renee, first of three children.
Upon graduation in 1963 Charley became an employee of Phillips Petroleum Company, at their district office in Kansas City, Missouri. One year later the family moved to Bartlesville, Oklahoma because the company was consolidating their accounting staff.
During May, 1967, Judy gave birth to a son, Troy Randall. She was now mother of a daughter and son. During July, 1971 Judy presented the family another daughter, Jennifer Lynne, expanding the family to five.
She and Charley were very active in Bartlesville while supporting Michelle, Troy, and Jennifer with their school activities; plus supporting scouting and sports activities. Judy and Charley were very active in square dancing. The family were members of the East Cross Methodist Church in Bartlesville.
Judy led the family in their move to Stavanger, Norway where Charley worked for two years, which was a wonderful experience for the family. The children attended the American School while in Stavanger. The family returned to Bartlesville where Judy worked for Dr. W. Carter and Charley worked until being released in 1991 after thirty years of service.
The family moved to Kansas City, Missouri as Charley began employment with the City of Kansas City, Missouri. After retirement from the city, Charley became an employee of the Garfield Country District Attorney for two years and they made Enid their home. Judy and Charley are very proud of their five grandkids. They are also very proud that Michelle, Troy, and Jennifer each earned their Bachelor’s Degrees from the University of Central Oklahoma in Edmond.
Judy is survived by her husband, Charley; three children, Michelle Renee Walsh, Troy Randall Rasp; and Jennifer Lynne Rasp; three granddaughters and two grandsons; and a sister, Nancy Ward. She is preceded in death by her parents.
Memorial contributions in Judy’s name may be made to Accentra Hospice with Ladusau-Evans Funeral Home serving as custodian of the funds.
Condolences may be made and services viewed online at www.ladusauevans.com.