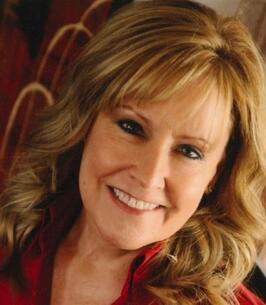 A Memorial service for Julie Day will be held 11:00am, Saturday, December 3, 2022 in the Ladusau-Evans Funeral Home Chapel with Jim Edmison officiating. Cremation arrangements and services are under the direction of Ladusau-Evans Funeral Home.
Julie was born August 23, 1956 in San Francisco, California, to James Gibson Day and Jerry Ray Day, and passed away Monday, November 21, 2022. Her only sibling was her brother, Herb Day.
Julie’s father was a pilot in the US Air Force and served in several military installations. She lived with her family in San Francisco, California, Roswell, New Mexico, and Big Springs, Texas just to name a few.
Later, she and her brother, Herb went to live with their grandparents, Fay and Wanda Cake, in Hunter, Oklahoma.
Julie made several friends while growing up in Hunter, OK. She participated in basketball and cheerleading, and was also involved in several church activities. She sang in the Hunter Methodist Church Choir and was apart of the Christian Youth Fellowship Group.
Later on, Julie moved to Enid to live with her mother, where she participated in various clubs and school organizations. She made many friends and was very popular.
As the years advanced, Julie moved to LA for a while and then to Vegas, and eventually to Florida where she became a flight attendant for Air Florida. In her job, she was able to travel to many countries in the World, making friends along the way with her very social personality, pretty smile, and her unique laugh.
Some years later, after Air Florida dissolved, Julie relocated to LA. She later became a JR. Executor at MGM Studios in Santa Monica, CA, before moving back to Las Vegas, where her brother lived.
Julie loved all animals, especially cats. Over the years she took care of her own cats as well as taking care of feral cats in her area. She was a frequent visitor to the local animal shelters, where she would care for many of the strays, thus giving them a better life.
Later in life, Julie moved back to Enid, where she reconnected with friends, and worked for UPS, as an office manager.
Julie was very strong willed and courageous, fighting her battle with cancer. Throughout Julie’s life she was highly regarded for her fierce independence, loyalty to others and standing up for what was right. She was unafraid and steady in her beliefs that guided her through her entire life. Julie was a kind, caring and helpful person and she displayed integrity that is often not found in today’s world. Julie will be missed by many.
On behalf of the family, we would like to extend a tremendous thank you to the Nurses and Staff at Hospice Circle of Love for the compassion and care you gave to Julie.