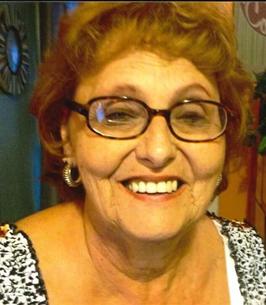 Funeral services for Candy Warner will be held 10:00 am, Friday, July 10, 2020 at Ladusau-Evans Chapel, with her brother Gene Long officiating. Services are under the direction of Ladusau-Evans Funeral Home.
Candy was born February 8, 1951 in Enid to Willard and Irene Long. She grew up in Enid, and married J.R. Robbins in 1966. From that union came the births of her sons Robbie and Chad. After the death of the father of her children, Candy married Earl Warner, August 14, 1992. They had been best friends for almost 28 years. If you ever went to the We Too restaurant for breakfast, the smiling face you would see would be the little red head Candy. She worked at We Too for many years, where she was loved by employees and customers. Candy was always smiling and happy to see everyone. She was struck by dementia and Alzheimer’s 10 years ago. She put up a good fight, but God called her Home.
Candy is survived by her husband, Earl Warner; sons, Robbie Robbins and Chad Robbins; sister, Connie Long Peeler; brothers, Gene, Rocky and Ben Long; step daughter, Shawna Cole; step son, Jason Warner; 4 grandchildren, Amethyst, Autumn, Coulton and Justin Robbins; 3 step grandchildren, Margaret, Christopher and Jonathan; lots of nieces, nephews, cousins and many friends. Memorials in Candy’s name in honor of her granddaughter, Autumn to the Craig Willie Foundation, with Ladusau-Evans serving as custodian of the funds.
She is preceded in death by her parents; 2 sisters and 1 brother.