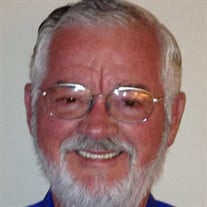 Celebration of Life Service for Larry L. Teske, 75, of Enid will be 10:00 A.M. Monday, January 17, 2022, in the Anderson-Burris Chapel with Rev. Mark McAdow officiating. Cremation and arrangements are under the direction of Anderson-Burris Funeral Home and Crematory.

Larry was born September 2, 1946 in Enid to Frank and Eva Reim Teske and passed away January 11, 2022 in Enid. He graduated from Carrier High School with the class of 1964, furthered his education by earning a B.A. in Psychology from the University of Central Oklahoma in 1976, a M.E.D. in Special Education in 1978, a M.E.D. in Elementary School Administration in 1988, and a M.E.D. in Industrial/Occupational Safety in 1997.

Larry was a veteran of the U.S. Navy serving in the Philippines, and aboard the U.S.S. Eldorado during the Vietnam War. He retired from the U.S. Navy after 26 years of honorable service. After his retirement from Oklahoma Public Schools, he worked for the DOD and lived in Japan for three years as well as England for seven years.

Larry had a special zest for life. He wanted to travel the world and see all that it had to offer, and he did…he had traveled to all seven continents. As one trip would end, he’d be packing for another! Each new sight visited was at least five stories told upon his return home. Larry had a green thumb…no. Larry had a green soul. His love for gardening was immeasurable! His favorite thing to plant was tomatoes, but he’d love to show anybody and everybody his whole garden any chance he had. He was so proud of all his hard work. And Larry sure was a hard worker. Not only did he have amazing gardening skills but he also retained the best dishwashing skills. At every family holiday he would go to the kitchen and begin doing the dishes after he finished his food. He did not have any interest in allowing somebody else to do the dishes while he watched T.V. He wanted to be the one cleaning up. That was just the tip of the gentleman iceberg that was Larry. Whenever women would try to open their own doors, whether to a store, a house, or a car, he would beat them to the punch and open it for them. He had a special connection to the people and the world surrounding him. His motto was, “Everything works out for the best” and he truly lived by that. Larry is survived by his significant other, Linda Clemens, two brothers, Randy Teske and Denny Gibson, many nephews, and nieces. He was preceded in death by his beloved son Bo Nathaniel, parents, brothers Charles and Earl Teske, and Rick Gibson.