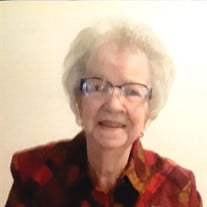 Private family graveside service for Leona Icke was held in Memorial Park Cemetery under the direction of Anderson-Burris Funeral Home and Crematory.

She grew up in Buffalo and graduated from Buffalo High School. On August 2, 1950, she married Herman Oscar Icke. After Herman’s discharge from the service, they made their home in Alva and later Enid. In 1972, they moved to Colorado and returned to Enid in 1988. Leona worked for several years at Bass Hospital as a nurse’s aide and chart clerk. She worked the night shift so she could be home when the children got home from school. She was an excellent cook and loved trying new recipes, making the best pie crusts.

Leona was preceded in death by her husband, Herman on June 24, 2021; parents and two brothers, Virgil and George.

Memorials may be made through Anderson-Burris to St. Jude’s.