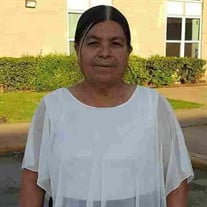 Mass of Christian Burial for Maria Guadalupe Rojo-Chavez, 66 of Oklahoma City will be Wednesday, September 29, 2021 at 11:00 am in St. Francis Xavier Catholic Church with Rev. John Herrera celebrant. Burial will follow in Collette Cemetery, Fairmont under the direction of Anderson-Burris Funeral Home.

Maria was born December 12, 1954 in Hidalgo, Mexico to Luis Majin Rojo-Herrera and Rutila Chavez Rezendis and died on September 21, 2021 in Oklahoma City.

She grew up in Mexico and moved to Oklahoma. Maria became a United States Citizen and lived in Oklahoma for many years.

She was preceded in death by her parents, husband, and sister, Juana Rojo Chavez.