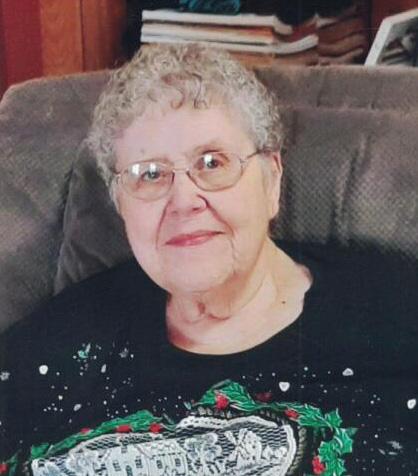 On May 6 Marjorie Lynette (Sherbon) Redmond known as Sunny to friends and family at the age of 86 was called home and carried into Jesus arms after a battle of lung cancer. Sunny was the eldest of 6 children born to Leonard and Margaret Sherbon on October 14th,1935 in Arkansas City, Kansas. She graduated from Ponca City high school in 1954 with honors in home economics.
June 6th, 1954. Sunny married first husband Bobby Osborne. They had two children son Richard and daughter Lynette.
She was active in Oklahoma Ave Baptist church where she played the organ and helped lead songs.
She worked at Dollar Saver in the fabric department for many years. Until Sunny married Eldon Redmond on May 10,1974. Where they made a home for five teenagers. She enjoyed camping and fishing with her husband. Sunny was so creative with everything she did from decorating birthday and wedding cakes, ceramics, crocheting. But her main talent was her eye for fashion designing and sewing every kind of clothing for men, women or children. Sunny found great satisfaction in designing and sewing swimsuits for post-mastectomy breast cancer survivors.
A great light has gone out in the world, and she will be missed by all those who knew and loved her.
Sunny is survived by her husband Eldon Redmond of Ponca City Ok. Daughters Lynette (Joe) Martin of Piedmont, OK. Kathryn (Steve) Pruitt of Burgaw, NC. Darla (Pete) Duncan of Colcord, OK. Sister Gayla McCoy of Arkansas City, KS. Brothers Jack (Connie) Sherbon of Ponca City, OK. Danny (Anna) Sherbon of San Angelo, TX. Daughter-in-law Debra Redmond of Ponca City, OK. Sister-in-law Karen Barnett of Ponca City, OK. Eleven grandchildren, seventeen great grandchildren and one great-great grandchild. Many nieces, nephews and cousins.
Sunny is preceded in death by her parents Leonard and Margaret Sherbon. Twin sisters Glenda and Linda Sherbon. First husband Bobby Osborne. Son and Daughter-in-law Richard and Sandra Osborne. Son Kerry Redmond and granddaughter Holly Redmond.