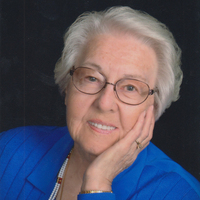 The memorial service for Nona G. Miller-Lang, 99 year-old Enid resident, will be 2:00pm Saturday, September 24, 2022 in the Henninger-Hinson Funeral Home Chapel with Reverend Gail Edmison officiating. A private burial will be held at a later date in Rose Hill Cemetery, Carrier, Oklahoma.

The daughter of LaFayette and Pearl Viola (Houston) Massingill, Nona was born March 8, 1923 in Bison, Oklahoma. She graduated from Waukomis High School and Enid Business College. She also completed work at Oklahoma City University, Oklahoma State University, Phillips University and Northwestern Oklahoma College. Nona was the receptionist at Frank Machine Company before serving as secretary of First United Methodist Church in Enid. After raising her children, Nona worked as the Carrier School secretary then bookkeeper of the Placement/Registrar/Credit Union Office at Phillips University.

She met Clarence Ernest Miller, while working at the Church, when he returned after three years in World War II. They were married Friday, September 13, 1946 and had forty-seven busy years of raising three children, farming, education and politics. In the sixty’s and early seventy’s, while Clarence was serving as Garfield County Superintendent of Schools, Nona served on the Garfield County Republican Women’s Committee. Clarence died on October 6, 1993. She continued living on the farm west of Enid until February 3, 2001 when she married their long-time friend, Carlos “Chuck” J. Lang. After a special eighteen months, Chuck passed on August 13, 2003.

Nona enjoyed gardening, sewing, quilting and all kinds of handwork. For fifty-one years, she did genealogical research and assisted an aunt in publishing a book on her mother’s ancestry. She really liked the challenge of a good jigsaw puzzle.

She was a member of the Ruth Chapter #447 (now Enid #36) Order of the Eastern Star, Enid Shriners Ladies, and a forty-two year member of the Enid Chapter of DAR, serving as regent and other local and state offices. Nona was a thirty-four year member of Colonial Dames XVII Chapter, having served as chapter and state President and other offices on both levels. She was a member of Magna Charta Dames and Barons Oklahoma Division, serving as regent and other offices. Also, Nona was a member of Mayflower Descendants, Americans of Royal Descent, life member of Sons and Daughters of Cherokee Strip and the Oklahoma Historical Society. She served seven years on the Enid and Garfield County Library Board and when her children were in school, she served as Carrier PTA President and 4-H leader.

A very important organization in Nona’s life was Vernon Extension Club. As a young homemaker in 1947, it was a very educational influence on all aspects of her life, from sewing, gardening and decorating to parliamentary procedures.