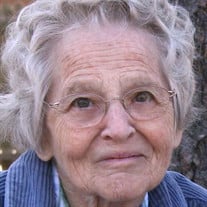 In His infinite mercy, her Lord and Savior has gathered to Himself the soul of Patricia Mae Krecklow, who died Saturday, January 15, 2022, in Enid, Okla., at the age of 91. The rite of Christian burial will be conducted for family members by the Rev. James Fandrey at Lincoln Memorial Park Cemetery, Lincoln, Neb.

Mrs. Krecklow was born Sept. 19, 1930, at St. Mary’s Hospital in Nebraska City, Neb., to William W. and Jewel (Taylor) Whipple. She was baptized on Easter Sunday, April 6, 1941, at the Wyoming (Neb.) Methodist Church.
Pat, or Patty as she was known as a child, was raised in Otoe and Cass counties in Southeast Nebraska, including the communities of Wyoming and Union. She had an older sister, Betty, younger sister, Lou Willa and a younger brother, William Frank. She attended District 81 Otoe County Rural School and was graduated from Nebraska City High School. On July 27, 1949, she married Keith Neville Krecklow at the home of her parents in rural Nebraska City. They reared two children, Robert Louis and LynnDe Mae, and their family later grew to include five grandchildren and seven great-grandchildren. Mrs. Krecklow was preceded in death by her husband in December 2019, which prompted her relocation to Enid in 2020. She also was preceded in death by her parents and her sisters Betty Teten and Lou Willa Rugg. Survivors include her son Robb (Carolyn) Krecklow of Dallas, Tex.; her daughter LynnDe (Jeff) Funk of Enid, Okla.; grandchildren Jennifer (Tim) Randall of Haslet, Tex.; JoLynn (Jeremy) Petersen of North Platte, Neb.; Robert Krecklow of Dallas; Justin (Mara) Funk of Enid, Okla.; and Patricia (Bryan) Salcedo of Melissa, Tex. Also, her brother, William Frank (Pat) Whipple of Papillion, Neb. She was confirmed a member of the Lutheran Church – Missouri Synod on Feb. 14, 1950, at Immanuel Lutheran Church in Louisville, Neb. After moving to Beatrice later that year, Mr. and Mrs. Krecklow joined St. Paul’s Lutheran Church, where they continued to worship and serve for more than 65 years. She was a member of Dorcas Society and a Sunday school teacher. She also served as a home room mother at her children’s grade schools among many other volunteer activities.
Her career included work for the Otoe County Extension Service, the Nebraska City News-Press, Cass County ASCS office and the Weeping Water office of Lincoln Telephone and Telegraph. In Beatrice, she worked for Mr. M.G. Winne, longtime Gage County Superintendent of Schools. Mrs. Krecklow was an active volunteer with 4-H and fair activities. She was a 4-H member growing up and served as a 4-H leader for 15 years and a member of the Gage County 4-H Committee. She was a life member of the Gage County Agricultural Society and served as a superintendent of the Gage County Fair, both 4-H and open class. She was interested in genealogy, tracing family backgrounds through numerous visits to cemeteries and courthouses in several counties and states. She was a member of the Nebraska State Genealogical Society and the Southeast Nebraska Genealogical Society.

She took intense interest in her family, writing thousands of personal letters and cards to her children and grandchildren. Having been a newspaper reporter, her kitchen calendar was filled with notations of everything from weather data to family activities - a virtual news archive of her community and family.