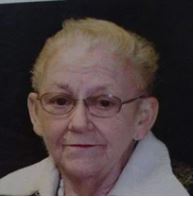 Patricia Ruth Arnbrecht was born on July 30, 1933 in Shattuck, Oklahoma to Bessie Ruth (Shelton) Love and Len Wilbur Love. Patricia went to be with her LORD and SAVIOR on September 24, 2020.

Patricia spent her early life living on a farm south of Arnett, Oklahoma. Patricia attended the Arnett Public Schools through the 6th grade. In 1945 Patricia and her family moved to Glazier, Texas. Patricia attended the Canadian Public Schools from 7th grade through the 12th grade. Patricia graduated from Canadian High School in 1951. Shortly after graduating from high school she moved to Shattuck, Oklahoma and worked as a housekeeper and nanny. In the fall of 1951, Patricia met and started dating Herbert E. Arnbrecht. Patricia and Herbert were married on March 1, 1952 in the parsonage of the Faith United Brethren Church in Woodward, Oklahoma. To this marriage two children were born, John Len in 1955 and Janet Ranae in 1957.

Patricia worked briefly at the Hunter’s Cleaners and Laundry in Woodward, Oklahoma. After her children were born, she had a babysitting service in her home. Later in her life, Patricia had a house cleaning service and took in ironings.

Patricia was a longtime member of the Faith United Methodist Church in Woodward, Oklahoma.