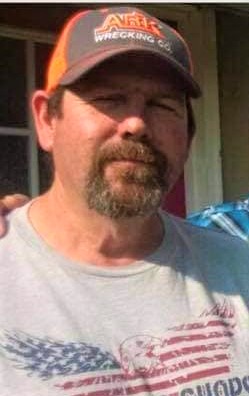 Ronald Wayne Higgins, 60, passed away peacefully in his home October 18, 2021. “Not of COVID” Ron was born August 28, 1961 in Wichita, KS to Richard and Kay Higgins. He grew up in Newkirk, OK with his two brothers Rodney and Rick where they created much havoc with their dad in spite of their mom trying to keep them in line.

When he received his HS Diploma he returned to Wichita where he met Cindy Fouch. Ron and Cindy married October 26, 1981. They had three children together; Melissa Ann, Rebecca Lynn and Robert Wayne.

Ron was a ‘Jack of all trades’ when it came to supporting his family. Most of the time he jumped back and forth between being ‘Top Dog’ while truck driving and as a licensed plumber. The last ten years he spent working as a Truck Driver with his family trucking company in Collinsville and helping other truck drivers out by selling truck parts at Southwest Truck Parts in Ponca City. Ron spent the last week working with the Child Nutrition department at the Ponca City High School. No matter what he did to make a living he always made friends along the way.

Big Ron loved to smoke meat and anything else he could fit on the smoker. He enjoyed having a get together with friends and family to share his magic. His friends would say that he was a fun guy, loved to joke around and the first person willing to help in any situation. He spent his time watching his grandkids at their extracurriculars, conversating with his daughters, catching up with his cousins, watching a good western or anything with John Wayne and listening to some “Oldies.” If you wanted to know where the best places to fish you would call him. He would load up his favorite fishing poles and gear and take you anywhere to get the best catfish. His presence will be greatly missed.

Ron was preceded in death by his parents, grandparents, his brother Rick and his son Robert.