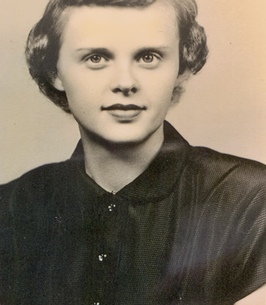 A Mass of Christian Burial for Rubena “Beanie” Kokojan will be 10:00am, Wednesday, July 21, 2021 at St. Gregory the Great Catholic Church with Father John Herrera celebrating Beanie’s life; with burial following in Hennessey Calvary Cemetery. Deacon Tony Crispo will officiate the Rosary, which will be 7:00 pm, Tuesday, July 20th at Ladusau-Evans Funeral Home.

Rubena "Beanie" Kokojan was the nineth of ten children born on the family farm north of Enid to Daniel and Emma (Harms) Toews on September 14, 1935. She attended Columbia Grade School until it was closed and graduated from Kremlin High School. She married Valerian Kokojan on February 20, 1960 at St. Frances Catholic Church. On April 12, 1961, they were blessed with a son, Larry. Beanie and Val lived and worked on their farm just north of Bison until Valerian passed away in an accident on April 24, 1974. She was blessed with a grandson, Lance, on March 21, 1997, who graduated from Chisholm High School and then from Wichita St. University, and now lives in Kansas City, Missouri.

Beanie was known at The Commons as funny and quick witted, very rarely stayed in her room except to sleep, walking all over the place most of the day! She loved to play bingo three times a week and always won at least two times if not three every time they played. Doing exercises with the preschoolers was a definite highlight in the mornings. Grandma Beanie always had one or two of them in her chair with her! After graduating from Kremlin, she was a bookkeeper for George E. Failing & Company and Hackney Iron and Steel and after Val's death, she was employed as secretary to the superintendent of Waukomis Public Schools and retired from WB Johnsons in 2000. Then she continued employment for several years with RSVP of Oklahoma. People will remember Beanie for her quick wit and who brings smiles or laughs to the people she comes in contact with. In 2012, due to a fall at the farm, she was moved to The Commons, where she was around people and things to do (bingo, musical programs and exercise with precious little pre-kindergartners, which she loved). Beanie was known at The Commons AS FUNNY AND QUICK-WITTED, very rarely stayed in her room during the day, walking all over the place! She loved to play Bingo and would play 3 bingo cards at a time. Usually, she would win 3 games and looked forward to choosing Hershey candy bars as her prizes. Beanie was known to be a "chocoholic and not an alcoholic" and was proud of it. She usually had at least 2 servings of chocolate a day after her meals whether it be Hershey bars, brownies from Jumbos, or chocolate desserts that came with the meals! Beanie seemed to like any and most of the meals served at The Commons and when she didn't, she would most always choose a hamburger and fries. Beanie had a strong faith in the Lord and loved to sing hymns. Praying for God to help her through tough times was easy for her and then believing He would! As 4- and 5-year-olds, Beanie and Bert would sing for the preacher when he came to the house to visit and then would be asked to sing duets in church! Bert and Beanie took piano lessons, that is for a while, until the piano teacher told mom and dad, they were wasting their money on Beanie, because she played by ear and there was nothing she could teach her! She was a wonderful pianist! Beanie was a God-send for her mother and loved her dearly. She always spoke of mom in the very kindest ways and what an example she was! Growing up, Beanie got the short end of the stick in attention because she and Bert were only 14 months apart and Bert started suffering from asthma at about age 6 and got a LOT more attention throughout the grade school years than Beanie. Beanie was a joy and a delight when her brother Ed was also confined to The Commons, as you can tell by the pictures. She could bring laughter to a room without any effort on her part! Another neat memory is one day, when Bert and Beanie were about 8 and 9, they walked way back in the wheat field and picked some pears that were on the fence line, but on the neighbor’s side. When we got home and mom found out what we had done, mom, Beanie and Bert walked over a mile to Bogert's house to apologize for taking the pears and each gave her a dime. Mrs. Bogert said that normally she would give back the dimes, but since mom was trying to teach us a lesson, she was going to keep them and thanked them for being honest.