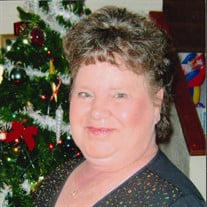 Funeral service for Tina Brueggemann-Herbst, 64, will be Thursday, July 7, 2022 at 1:00 pm in Anderson-Burris Funeral Home Chapel with Reverend Richard Stephens officiating. Burial will follow in Fairview Cemetery under the direction of Anderson-Burris. Visitation with the family present will be Wednesday evening from 6:00-7:00 pm at the funeral home.

She played in the band and later switching to choir in high school. She graduated from Montgomery Blair High School. Tina had a beautiful voice and would sing in church. She worked various jobs before becoming a homemaker. Tina served in the U.S. Army during Dessert Storm. She enjoyed cooking, baking, garden and crocheting before arthritis made it hard to do those things. Tina loved her grandbabies so much and her kittens.

She was preceded in death by her husband, Melvin Herbst; mother, Betty Stafford; sister, Tammy Sanders; and her grandparents.