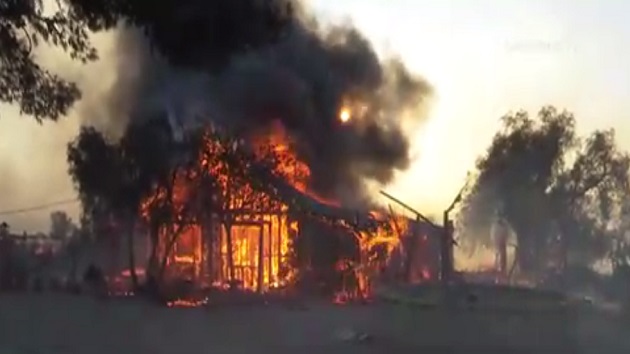 ABC News(SANTA CLARITA, Calif.) — Authorities ordered 50,000 residents in Northern California to evacuate Saturday ahead of a “potentially historic” wind event that could exacerbate the wildfires that are already scorching the area.

Essick said it is the largest evacuation order he’s conducted in his 26-year career.

The Kincade Fire in Sonoma and Lake County had burned 25,455 acres and was 10% contained as of Saturday morning, according to Cal Fire. At least 49 structures had been destroyed, with another 23,500 at risk of being damaged, the agency said.

Dominic Foppoli, the mayor of Windsor, one of the towns ordered to evacuate, implored residents to get out quickly.

“This is a life-threatening situation and a danger to our entire town,” Foppoli said.

David Hagele, the mayor of Healdsburg, another town ordered to evacuate entirely, similarly stressed the urgency of the matter.

“It’s time to drop things, pack, and go in a calm and orderly manner,” Hagele said.

Jonathon Cox, the division chief at Cal Fire, described the wind as having a possible “explosive” effect on the Kincade Fire, which started three days ago in the same area that a PG&E transmission tower broke, according to a report from the company.

Dry winds up to 65 mph could lead to erratic and dangerous fire growth, bringing even more critical fire conditions to parts of the Golden State.

Pacific Gas and Electric Co. announced Saturday the company will shut off power for approximately 940,000 customers, an increase of 90,000 from the previous estimate of 850,000. The shutoffs, which will impact 36 counties across Northern and Central California, are for safety, according to the company.

“We would only take this decision for one reason – to help reduce catastrophic wildfire risk to our customers and communities,” Michael Lewis, PG&E’s senior vice president of Electric Operations, said in a statement.

The power outage will begin Saturday between 6 p.m. and 10 p.m. local time and continue through midday Monday.

San Jose Mayor Sam Liccardo urged residents to be prepared for the shutoffs and asked them not to drive if they don’t need to during the shutoff. However, he said these outages “can’t be the new normal.”

“We need to find better solutions,” he said.

Around 1,000 PG&E customers in Sonoma County are still without power, and there is no estimate as to when it will be restored, according to the company.

Several other wildfires have scorched thousands of acres throughout the state.

The Tick Fire in Southern California has burned 4,615 acres and was 25% contained as of Saturday morning, after erupting Thursday in Los Angeles County, Cal Fire reported. The fire was only 5% Friday evening.

At least nine structures have been destroyed as a result of that wildfire, according to Cal Fire.

Evacuation orders were issued, but some residents have since been allowed to return home.

High pressure building across the Pacific will nudge eastward beginning Saturday and through the next few days, bringing dry north to northeasterly winds into parts of the West.

In Northern California, wind gusts will gradually increase throughout Saturday then peak on Sunday. Relative humidity could be as low as 8%, bringing extremely critical fire weather on Sunday, such that any fire that ignites could rapidly spread out of control.

Beginning on Sunday and lasting into Monday, the dry damaging offshore winds will expand into parts of Southern California. These Santa Ana winds could gust as high as 50 mph and relative humidity could be as low as 5%.

Another Santa Ana wind event, perhaps another significant one, will arrive by the middle of the upcoming week.

New Orleans International Airport, meanwhile, has recorded 5.71 inches of rain so far. As of Saturday afternoon, the airport was still experiencing power outages due to the storm and there were at least 136,000 people without power across the state.

As Olga becomes a common mid-latitude cyclone, heavy rain will continue to spread inland through the Mississippi River Valley, eventually getting to the Midwest later Saturday, and into ports of the Northeast by Sunday and Sunday night.

Flood alerts have been issued from Louisiana to Illinois for the possibility of excessive rainfall, and heavy rain is expected in parts of the Central and Eastern U.S. this weekend.

Up to 4 inches of rain is expected in parts of Illinois and Missouri — and perhaps Indiana — through the end of the weekend.

A new winter storm is also developing in the Rockies this weekend, which will quickly dive down into the I-25 corridor from Cheyenne to Denver late Saturday and into Sunday.

Winter storm watches have been issued for those areas this weekend. Snow will pick up in intensity on Sunday in Denver and last through Monday morning, perhaps impacting the Monday morning commute.

Five to eight inches of snow is possible along the I-25 cities in Colorado and Wyoming, from Pueblo to Denver through Monday morning.