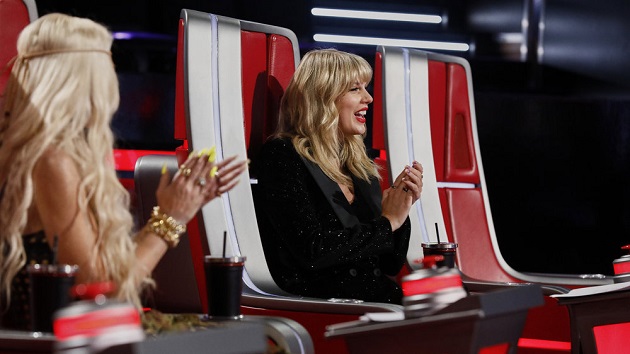 The coaches also got one chance each to either steal an artist from someone else’s team.

Team Legend’s James Violet, singing Post Malone’s “Stay,” faced off against Khalea Lynee, tacking “Because You Love Me, by Céline Dion.  Taylor had similar advice for both artists: James needed to put aside his natural “coolness” and allow the emotion of the song come through; Khalea needed to trade “perfection” for “passion.”  While the other coaches thought James nailed his song, they were absolutely blown away by the power and tone of Khalea’s voice.  Legend went as far as comparing Lynee to Whitney Houston, before declaring her the winner.  She advances to the live playoffs.  James was sent packing.

Next up, Team Gwen’s Jessie Lawrence, covering Sam Smith and Normani’s “Dancing with a Stranger,” faced Kyndall Inskeep, singing Sia’s “Elastic Heart.”  Gwen and Taylor agreed Jessie had the vocal chops, but needed to work more on letting his personality come through.  Swift complimented Kyndall for having a unique voice, but thought it was, at times, a little too stylized.  The coaches thought both artists were on their games, but felt Kendyll picked the song best-suited to her voice.  Gwen agreed, pronouncing Inskeep the winner.  She advances to the next round, while Jessie heads home.

Team Blake had the final pairing of the night, which saw 15-year-old Joana Martinez and Ricky Duran, 29, singing The Mamas and the Papas’ “California Dreamin"” and The Black Crows’ “She Talks to Angels,” respectively.  Blake and Taylor urged Joana to work more on her stage presence, and Ricky to avoid over-singing his song.  The other judges were mixed on the winner: John and Kelly leaned towards Ricky, while Gwen preferred Joana.  Blake chose Ricky. who moves on to the live playoffs.

Gwen, however, wanted to here more from Martinez, and stole her from Blake.  Joana also heads to the next round, now representing Team Gwen.

The knockout rounds continue on Monday, when The Voice returns at 8 p.m. ET on NBC.