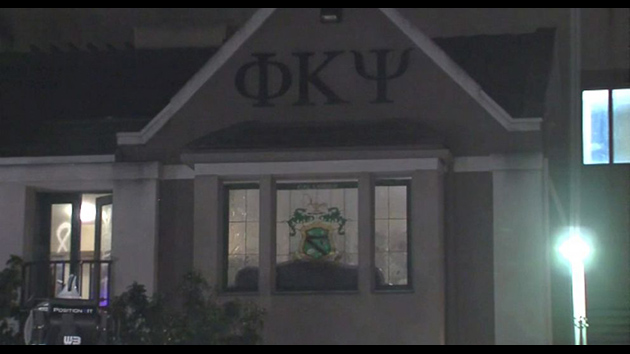 KGTV(SAN DIEG) — More than a dozen fraternities at San Diego State University have been suspended after a freshman was hospitalized following an event last week.The student allegedly attended a fraternity event Wednesday night that required him to receive medical attention the next morning, according to a statement from the university. Details from the event were not disclosed.University police responded to a 911 call of a student in need at a residence hall on Thursday morning. After officers provided aid on the scene, the student was transported to an area hospital, police said.During the course of the investigation, police have uncovered information that alleges the fraternity was “involved in possible misconduct,” university President Adela de la Torre wrote in a letter to students and faculty on Saturday.The university did not identify the student and emphasized the family’s request for privacy. The San Diego Union-Tribune reported that the student is a 19-year-old freshman and attended an event at the Phi Gamma Delta house.Representatives for the fraternity did not immediately respond to ABC News’ request for comment.A friend of the student’s told ABC San Diego affiliate KGTV that he fell off his bed on the top bunk Wednesday night and hit his head.The friend went to the residence hall after the victim’s roommate called her to help put him back in bed, she said, adding that she didn’t think anything was wrong with him at the time.The next morning, when she went to check on him, he was foaming at the mouth, his lips were purple and his skin was yellowing, she told the station, adding that she had performed CPR on him until first responders arrived.The student’s current condition is unknown.De la Torre suspended the Interfraternity Council and all chapter organizations under the council “given the severity” of the incident, effective Friday, according to the school. Prior to the student’s hospitalization, 10 of the IFC-affiliated fraternities were already under “some type of elevated judicial status,” which factored into the decision.Chapters of the National Pan-Hellenic Council, the College Panhellenic Association or the United Sorority and Fraternity Council or their affiliates will not be affected.De la Torre has asked those who have information about the case to come forward to police.Copyright © 2019, ABC Audio. All rights reserve