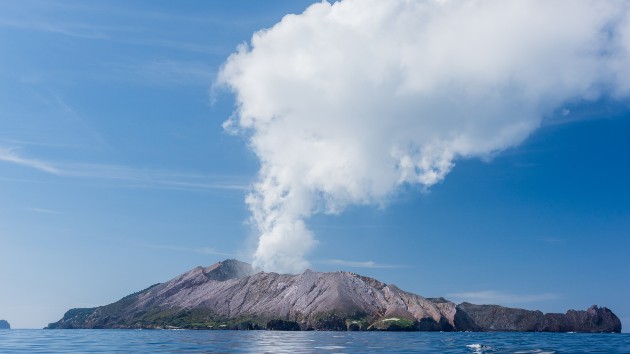 Echinophoria/iStock(WELLINGTON, New Zealand) — At least six people have now died in the wake of volcanic eruptions that occurred on a small island in New Zealand on Monday, officials said.All those who died had been rescued from White Island on Monday, with the sixth person succumbing to their injuries at a hospital on Tuesday, according to the New Zealand Police. Their nationalities and identities have not yet been released.Another eight people are missing and presumed to be dead, police said. Their nationalities were also unknown.”We can never say 100%, but I would strongly suggest that there is no one that has survived on the island,” New Zealand Police Deputy Commissioner John Tims said at a press conference Tuesday.Authorities are working to confirm the identities of the deceased as well as the injured.”The nature of the injuries that people have suffered is severe and means identifying them is a complex matter,” the New Zealand police said in a press release Tuesday.The country’s national police force has also launched an investigation into the circumstances of the deaths and injuries on White Island.”To correct an earlier statement, it is too early to confirm where there will also be a criminal investigation,” the New Zealand Police said.Nine Americans were among the dozens of tourists who were visiting White Island, also known as Whakaari, when the volcano there erupted multiple times on Monday afternoon, spewing steam, ash and debris into the air. There were also 24 Australians, five New Zealanders, four Germans, two people from China, two people from the United Kingdom and one person from Malaysia on the volcanic island at the time, according to police.The U.S. Department of State is aware that Americans were among those affected, a spokesperson told ABC News.”We are providing all appropriate consular assistance and are in close communication with local authorities who are conducting search and rescue operations,” the spokesperson said. “The Department extends our sincerest condolences to the families of those lost. Out of consideration for those involved, we have no further information at this time.”Some 30 passengers from the Ovation of the Seas cruise ship were among those visiting the volcanic island, according to New Zealand Cruise Association CEO Kevin O’Sullivan.“Our hope is that everyone will be recovered quickly and unharmed, but at this time we have no further information,” O’Sullivan said in a statement Monday.Dilip Patel, a passenger on the Ovation of the Seas, said the crew has been providing updates on the situation. He said there’s a somber mood among the passengers aboard the vessel, which remains docked at New Zealand’s Port of Tauranga.”I think they all share the same pain,” Patel, a South Carolina resident, told ABC News on Tuesday. “It could have been us. It could have been out family.”Thirty-four people have been rescued from the island via helicopters and taken to hospitals for injuries. Three people have been released from hospitals in the capital, Wellington, while another 31 remain hospitalized, with “a number in critical condition,” according to New Zealand Prime Minister Jacinda Ardern. Of the injured, 27 have burns over at least 30% of their bodies.Ardern told reporters that “no signs of life have been seen at any point” as aerial reconnaissance flights continue over the island.White Island, located 30 miles offshore from mainland New Zealand, is home to the country’s most active cone volcano. The uninhabited island has had regular eruptions for years but has become a widely popular tourist destination, accessible only by boat and helicopter.Peter Buttle said his family has owned White Island for over 80 years and are devastated by what happened there.”We are all shocked by what has occurred on Whakaari yesterday and our thoughts are with everyone affected by this tragedy,” Buttle, spokesperson for the Whakaari Trust, said in a statement Tuesday. “That we now have had a tragic event with devastating consequences leaves us absolutely heartbroken. Our thoughts are with the families of those affected.”The Buttle family has asked that the public respect a new prohibition restricting access to the ash-covered site, which police say is still too dangerous to search on the ground for the missing. Steam was still rising from the volcano more than 24 hours after the initial eruption.”It is unsafe for us to go onto that island,” Tims told reporters Monday night. “I’ve got to also consider the safety of our people and emergency services staff.”A 5-mile no-fly zone is in place around White Island, along with a 5-nautical-mile maritime exclusion zone, as there is still “unpredictable, ongoing volcanic activity,” according to Judy Turner, mayor of Whakatane, the closest mainland town just south of White Island.Those who cannot get in touch with a friend or family member in the wake of the volcanic eruption are urged to register them by visiting the New Zealand Red Cross website or call the New Zealand Police.