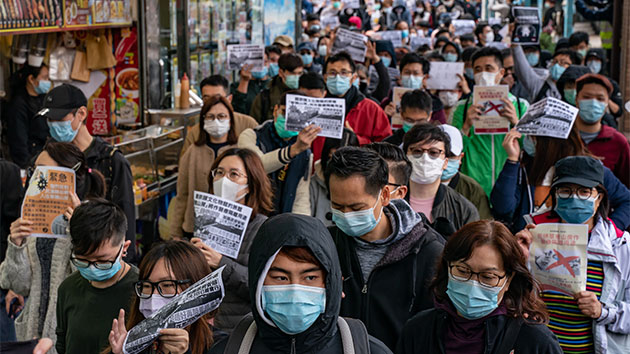 Anthony Kwan/Getty Images(HONG KONG) — Two more Americans, a husband and wife, were confirmed to have the coronavirus late Sunday in the second person-to-person transmission in the U.S. and the 10th and 11th cases in the country, respectively.The husband, from San Benito County, California, recently traveled to Wuhan, China, the center of the virus’ outbreak, and apparently passed the disease to his wife, who did not go to China. Both 57, neither has been hospitalized, but they have also not left their home. The couple’s diagnosis brings the total number of positive cases in the United States to 11. The ninth case in the country, in Santa Clara County, California, was announced Sunday afternoon. The other human-to-human transmission was also between a husband and wife and was announced last week in Illinois.There have been six cases in California, two in Illinois and one each in Massachusetts, Arizona and Washington.In the first case of a death outside China, a 44-year-old man died after contracting the coronavirus from his friend while they were traveling together in Wuhan, China, according to officials from the Philippines Department of Health.His friend, a 38-year-old woman, was the first person with a confirmed case for the virus in the Philippines, and her friend’s death is the only reported 2019 novel coronavirus acute respiratory disease (2019-nCoV) death outside of China, according to the World Health Organization (WHO) Philippines.The man — who is from Wuhan — arrived in the Philippines with the woman through Hong Kong on Jan. 21, according to the Republic of the Philippines’ Department Of Health. He died on Saturday.A week before the man’s death, he was admitted to the hospital for pneumonia after experiencing fever, cough and sore throat. The woman remains in isolation in a Manila hospital, officials said.The amount of coronavirus patients and deaths continue to increase in China, officials with WHO reported. There have been 14,380 confirmed cases as of Sunday morning — an increase of 2,590 since Saturday. As of Sunday, 304 people have died — an increase of 45 since the day before.Philippines’ Health Secretary Francisco T. Duque III gave his condolences to the deceased patient’s family and wants to emphasize for the public “that this is an imported case with no evidence of local transmission.”Outside of China, at least 169 cases have been confirmed in 25 countries.Health experts around the globe continue to debate on how the virus is transmitted. U.S. health officials previously said there wasn’t enough data to determine whether the virus could be transmitted before a patient who was infected developed symptoms, while German officials stand firm that asymptomatic transmission can occur.The U.S. Secretary of Health and Human Services Alex Azar declared a public health emergency and a temporary travel ban.The U.S. Department of Homeland Security (DHS) announced on Sunday that flights entering the country from China will be re-routed — at no additional cost to the passenger — to seven airports designated for screenings.”While the overall risk to the American public remains low, funneling all flights with passengers who have recently been in China is the most important and prudent step we can take at this time to decrease the strain on public health officials screening incoming travelers,” said DHS Acting Secretary Chad F. Wolf in a press release issued on Sunday.The international airports are John F. Kennedy in New York, Chicago O’Hare in Illinois, Seattle-Tacoma in Washington, Daniel K. Inouye in Hawaii, Hartsfield-Jackson in Georgia, as well as San Francisco and Los Angeles in California. They were approved by DHS, the Centers for Disease Control and Prevention (CDC) and the Transportation Security Administration (TSA). Washington-Dulles International Airport in Virginia, Newark Liberty International Airport in New Jersey, Dallas/Fort Worth International Airport in Texas and Detroit Metropolitan Airport in Michigan were later added to the list by the DHS. Copyright © 2020, ABC Audio. All rights reserved.