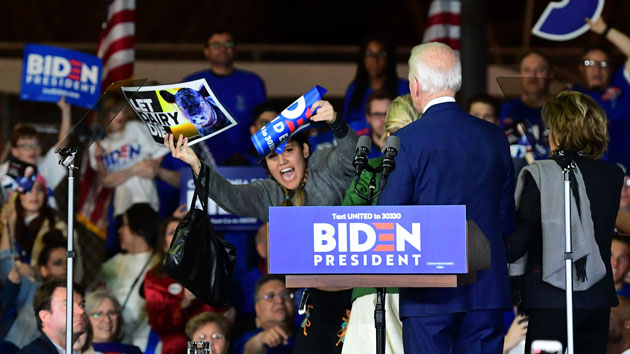 FREDERIC J. BROWN/AFP via Getty Images(WASHINGTON) — The chairman of the House Homeland Security Committee on Wednesday asked the acting Secretary of Homeland Security, Chad Wolf, to immediately consider giving Democratic presidential candidates U.S. Secret Service (USSS) protection for the rest of the campaign.The letter specifically names former Vice President Joe Biden and Sen. Bernie Sanders, I-Vt., saying that they appear to satisfy several criteria to be considered for protection. The letter lists factors such as large campaign operations, high polling averages, and physical threats to safety as factors to be taken into account. Under the law, the secretary of homeland security has the authority to determine which candidates should receive protection, after consulting with congressional leaders.”I urge you to immediately initiate the consultation process to determine whether to provide USSS protection to certain Democratic Presidential candidates,” the letter from House Homeland Security Committee Chairman Bennie Thompson said.The request comes just hours after anti-dairy protesters stormed the stage in Los Angeles Tuesday night as Biden celebrated his Super Tuesday wins.Rep. Cedric Richmond, a co-chair on the Biden campaign, acknowledged being aware of the request in a call with reporters Wednesday.“Let me say, I’m not sure about the vice president, and the incident on stage last night, but I can tell you that the Democratic Congress is worried about it,” Richmond said.Sanders received Secret Service protection as a Democratic contender in 2016.Other candidates at the time, Donald Trump and Ben Carson, also were given Secret Service protection while Hillary Clinton kept her protective detail she had as a former first lady.Even if candidates are found to be eligible for protection, they do not have to accept it. For example, in 2016, Sen. Ted Cruz, declined the security detail because it kept him at a distance from voters.According to the Secret Service, protection for major candidates and their spouses began after the assassination of Robert Kennedy in 1968, and it is designed to maintain the “integrity of the democratic process.” Copyright © 2020, ABC Audio. All rights reserved.

Black Friday 2020: Tips on the best deals to look out for
George Floyd’s brothers on the fight for justice, remembering him on Thanksgiving
Anticipating a vaccine, supply chain preps for challenges ahead
Denver mayor offers apology for Thanksgiving travel after urging residents to stay home
Bill Murray’s brother Ed, inspiration for ‘Caddyshack’, has died
Scotland becomes first nation to provide free period products for all