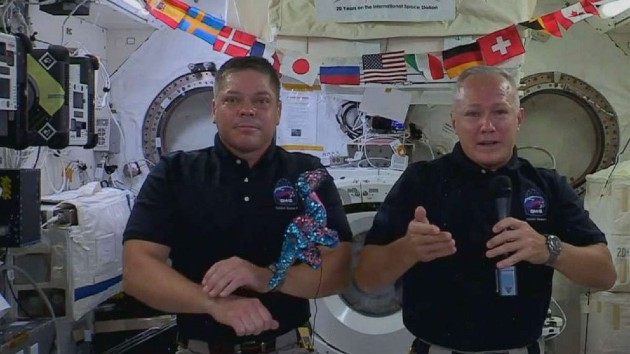 NASABy MINA KAJI and NATHAN LUNA, ABC News(NEW YORK) — It has been a little over a week since SpaceX’s Falcon 9 rocket lifted off from the Kennedy Space Center with NASA astronauts Bob Behnken and Doug Hurley on board. It was the first crewed launch to depart from American soil in nearly a decade.ABC News’ Transportation Correspondent Gio Benitez caught up with the NASA veterans from the International Space Station (ISS) on Monday.”It’s going pretty well. We’ve been very busy,” Hurley said, joking that they are still trying to get their “space legs.”The mission marked the first time a private company — Elon Musk’s SpaceX — successfully sent humans into orbit.”We probably got to the launch pad a little faster potentially than maybe a government organization would have done it,” Hurley said, but emphasized it was the combination of both SpaceX and NASA that made the historic launch possible.The astronauts said the simulations SpaceX and NASA put together matched a majority of what their experience felt like during the 19-hour journey to the ISS.”The one thing that was different is you just can’t simulate what it feels like to ride on a rocket into orbit,” Hurley explained. “The vibrations, the coming alive of the engines… all those noises and feelings and rumblings.”Both men are fathers and believe that one of their biggest contributions can be to inspire children to get into the science and technology fields.Throughout the interview Behnken made sure the third unofficial member of the Demo-2 crew, their sons’ sequin stuffed dinosaur named Tremor, was visible.”Both of our sons were just super excited to see the toy that they had selected go on the mission with us,” Behnken said. “I think in both of our cases our children were not old enough to really understand our history of flying on space shuttles, and my son wasn’t even born during my last mission and so to get this chance to share it with our children is really exciting.”Behnken and Hurley are both married to fellow NASA astronauts.”We know that the job that they have right now is much more difficult than the job we have,” Hurley said. “And what we are doing up here keeps us pretty busy and is pretty difficult, but there’s no comparison.”