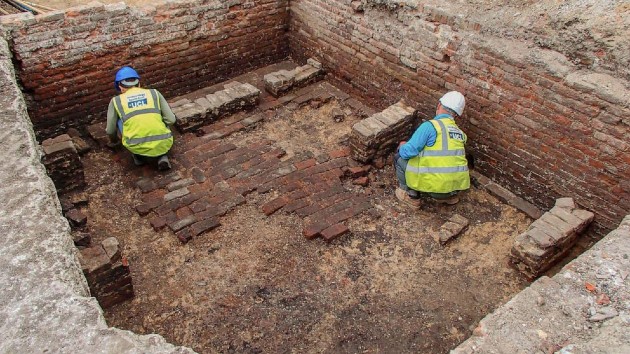 Archaeology South-East/UCLBy GUY DAVIES, ABC News(LONDON) — Archaeologists have discovered what they believe to be one of the earliest playhouses in London, which may date back over 450 years ago.A team from University College London (UCL) made the discovery this week. The team believes they found the Red Lion playhouse — the earliest known purpose-built playhouse in the U.K. — dating back to the reign of Queen Elizabeth I. The structure is estimated to have been built in 1567.”This is one of the most extraordinary sites I’ve worked on. After nearly five hundred years, the remains of the Red Lion playhouse, which marked the dawn of Elizabethan theatre, may have finally been found,” Stephen White, the director of the excavation for UCL, said in a statement. “The strength of the combined evidence — archaeological remains of buildings, in the right location, of the right period, seem to match up with characteristics of the playhouse recorded in early documents.””It is a privilege to be able to add to our understanding of this exciting period of history,” he added.The Elizabethan period heralded some of the best-known playwrights in British history, such as William Shakespeare, Ben Jonson and Christopher Marlowe.Prior to the discovery, information about the playhouse could be found in two lawsuits involving the owner, John Brayne, and carpenters who helped build the structure, dating 1567 and 1569, the team said.The excavation that unearthed the playhouse began in Whitechapel, East London, in January of last year — and the structure appears to match up with the dimensions detailed in the historic lawsuits of the 16th century.”This tantalising find follows the exciting recent discoveries of The Theatre and The Curtain playhouses in Shoreditch, and of the Boar’s Head in Aldgate, which together have immensely improved our understanding of the beginnings of English theatre,” Emily Gee, the regional director for London and the South East of Historic England, said.”We will continue to work closely with the developer to interpret these archaeological remains and display them so the public will be able to understand them within the finished development and appreciate the rich history of this site,” she added. Copyright © 2020, ABC Audio. All rights reserved.