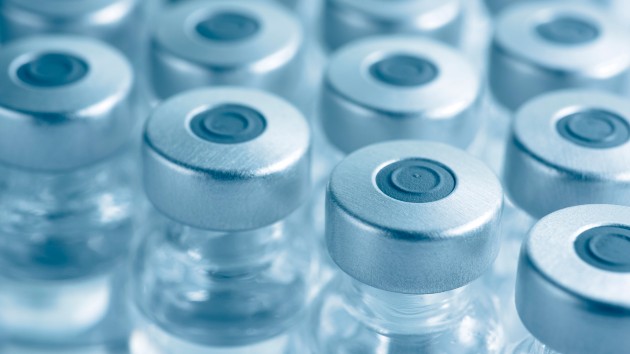 youngvet/iStockBy ELISSA NUNEZ and SONY SALZMAN, ABC News(NEW YORK) — Even though many potential COVID-19 vaccines require different pharmaceutical ingredients and processes, drugmakers around the world have found themselves racing to acquire a key ingredient without which they can’t distribute their live-saving drugs: glass.With at least 11 novel coronavirus vaccines having advanced to clinical trials, companies and governments are working to avoid a life-threatening bottleneck in the supply chain that could prevent the medicine from finding its way into the glass vials used to give patients shots.The glass market is relatively fixed and slow-growing, making it prone to shortages, according to BIO Vice President of Infectious Diseases Phyllis Arthur. Glass manufacturers, of which there are few, could have trouble sourcing thousands of vaccine doses, let alone billions.”That is an extraordinary surge in demand for that product, that specific piece of material,” Arthur said.The urgent demand for vials could not only overwhelm the U.S. market but trigger a global shortage, which is why scientists, manufacturers and government officials are sounding the alarm — and not just for glass.”We’re really dependent on this supply chain to remain free and available,” Genentech CEO Alexander Hardy said Tuesday during a PhRMA virtual press conference. “I intersperse my day, in between helping my kids with their homework, with calls to legislators and policymakers because this supply chain topic is really a critical one right now.”Dr. Rick Bright, the former head of the Biomedical Advanced Research and Development Authority, or BARDA, filed a whistleblower complaint in May warning that major pharmaceutical tubing suppliers already had sold out of borosilicate tubing, advising the administration to devise an immediate strategy to prevent more shortages.”It could take up to two years to produce enough vials for U.S. vaccine needs, while some therapeutics will also require vials,” Bright said.Such a delay in vaccine production could have disastrous consequences, as more than 450,000 people already have been lost to COVID-19. What’s more, a coronavirus vaccine that requires follow-up shots every few years could further stress medical supplies.Despite the demand, Erin Fox, senior director of Drug Information and Support Services at the University of Utah, said manufacturers still should prioritize safety in manufacturing processes. In a rush to develop drugs and vaccines in the past, major pharmaceutical companies have cut corners and neglected to maintain equipment, which has resulted in glass fragments embedded within the liquid of crucial medicines.”There’s so much opacity in the supply chain and how things are manufactured,” Fox said.However, Fox said that the current strategy of ramping up vaccine production before we even know which vaccines are likely to work may help avoid some of those safety problems because the lots can be checked for quality before being shipped off to clinics and hospitals. Companies that are proactively manufacturing doses won’t need to scramble later on, should their vaccines prove successful.”The U.S. government is working with several vaccine manufacturers in parallel to scale up their technology so that the vaccine would be ready in large quantities about the same time that the vaccine trial is done,” said Dr. John Mascola, director of the National Institutes of Health Vaccine Research Center, during a SciLine media briefing earlier this month.To accelerate distribution further, Operation Warp Speed will expand domestic manufacturing and supplies of specialized materials like glass vials, according to a senior administration official.The federal government also has spent millions of dollars to increase domestic manufacturing capacity. BARDA announced $204 million for Corning to produce an additional 164 million vials each year, if needed. It also invested $143 million in SiO2 Materials Science to scale up production capacity for the company’s glass-coded plastic containers.Global manufacturers also have offered to pitch in supplies to address the public health crisis. GlaxoSmithKline committed to producing one billion vaccine adjuvants for its COVID-19 partners, as it reduced the amount of vaccine protein required per dose during the flu pandemic, allowing more doses to be produced, according to a press release.The COVID-19 pandemic has already launched calls for overhauling the supply chain, as building production capacity in the U.S. rather than sourcing from other countries could prevent another shock wave in the future.”There’s definitely a role for us to be talking about post-pandemic how we can make supply chains more resilient, reduce dependencies on particular countries, but right now we need to make sure these supply chains are open and working effectively,” Hardy said. Copyright © 2020, ABC Audio. All rights reserved.