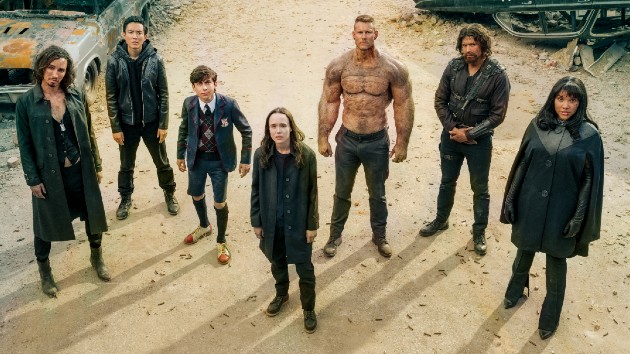 Christos Kalohoridis/NetflixThe second season of The Umbrella Academy is now available for streaming on Netflix.

The show, which is adaptation of the comic book series created by My Chemical Romance frontman Gerard Way, follows the Hargreeves children, each of whom has a unique superpower and a unique personality, to boot. Season two has the very disparate siblings scattered through the 1960s, where they need to come together to save the world…again.

Speaking to Rock Sound, actor Tom Hopper, who plays the super-strong Luther Hargreeves, says it was critical for him to follow the vision that Way saw for his character.

“I remember after reading the comics, it was very important for me that whatever it was that Gerard saw in these characters going into the TV show, it respected his initial vision,” Hopper explains.

“It was important for me to talk to him about the ways that I was going or the way that I saw it was the same way that he saw it,” the actor continues. “Fortunately it was and I think he’s been really pleased with everyone’s version of the characters that he came up with in the first place.”

Hopper adds that he was able to learn more about Way as a person while working together on set.

“I’ve chatted to Gerard since a couple of times more about other things,” Hopper says. “That’s the weird thing. When you’re immersed in the show you want to talk about other things other than the show. Which is actually really nice to get to know Gerard as who he is as person more than a guy who has created the comic books.”