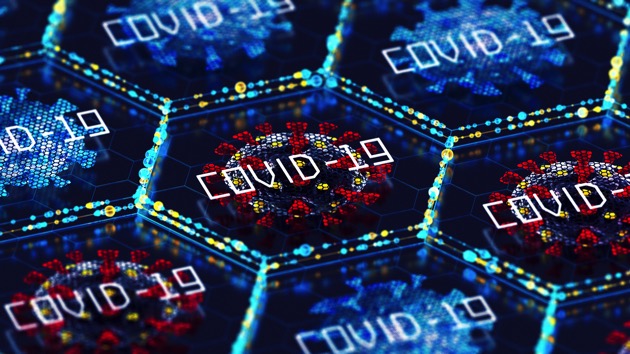 (LONDON) — The new COVID-19 variant first detected in the United Kingdom could have a biological advantage that allows it to spread faster, according to British scientists advising the U.K. government.Laboratory studies are ongoing to help scientists understand why this variant is spreading so quickly in the U.K. But scientists offered several intriguing guesses that could explain why, including the possibility that the variant could make COVID-infected persons more infectious, potentially accelerating transmission or expanding the transmission period.The variant could also replicate faster, leading to higher viral loads in infected persons, making them more likely to spread it to others, the scientists said.Other hypotheses are that the variant could shorten the time between being exposed and becoming infectious, or make the disease infectious for a longer period. For now, the precise “underlying mechanism” is unclear.Professors Neil Ferguson, Peter Horby and Wendy Barclay, all leading British scientists advising the U.K. government, gave an emergency evidence session on the new variant of COVID-19 before the British Parliament on Wednesday.”We saw the non-variant decline in a particular week and place, whilst the variant increased in the same week and place in the same population,” Ferguson said.There were questions on whether a lax attitude with lockdown measures could be solely responsible for the surge of cases in the U.K., but Ferguson said corroboration of other data suggested otherwise.The fast propagation of this variant led U.K. Health Minister Matt Hancock to extend the lockdown measures in London to other parts of the country including Sussex and Hampshire on Wednesday, only two days before Christmas.Another worrying aspect pointed out by experts is the way this variant could affect young people. Comparisons with the non-variant show a statistically significant proportion of cases in under-15-year-olds. “Beyond that we know nothing,” Ferguson said, adding there could be a number of hypotheses as to why that is the case. He emphasized however, that while it is a significant shift, it is “not a huge shift.”Throughout the pandemic, the virus has developed random errors when copying itself. Those errors — also called mutations — mean there are now thousands of distinct lineages of the virus circulating across the globe. Some of those mutations may give certain lineages an advantage — potentially enabling them to spread more rapidly — which is what scientists believe may have happened in with this new U.K. variant.According to Ferguson, the new variant likely started from one person in Kent, in the U.K, but “we cannot completely rule out that it was an importation” from another part of the world, he added.While the variant has not been detected in the United States according to the Centers for Disease Control and Prevention, it has “almost certainly” been introduced to the “great majority if not all” European countries, according to Ferguson.The scientists, however, leant reassurance about the efficiency of a vaccine. They stress that despite these new variants, it’s all the same virus — SARS-COV-2. And although studies are still ongoing it is “highly unlikely” that the entire vaccine response will be rendered useless by this variant, Barclay said.Co-founder of BioNTech, Ugur Sahin, said on Tuesday it’s unlikely the variant will be able to escape current vaccines. Nevertheless, should the vaccine need to be adjusted for the new variant, the company could do so in about six weeks. Regulators might have to approve the changes before the shots can be used.Copyright © 2020, ABC Audio. All rights reserved.

Only half of eligible Americans have gotten their first COVID booster

Think you have monkeypox? It might be another skin condition