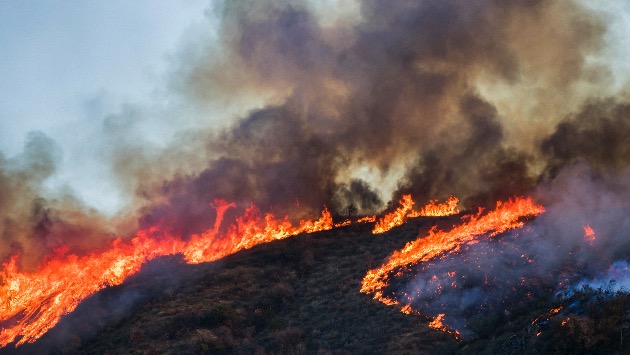 Burning in the hills north of Los Angeles’ famous Getty Center, the Getty Fire, which started just before 2 a.m. local time, has consumed over 600 acres. The Getty Center and Getty Villa are safe, but many houses were ablaze.

Mandatory evacuations are in effect in Los Angeles from the 405 freeway to the ocean — which spans some of the most expensive real estate in the city. Southbound lanes of the 405 freeway, the busiest highway in the country, are now closed.

Angelinos who live in the perimeter of the fire was sent a wireless emergency alert in the middle of the night, said fire officials.

Horrible situation on #tigertail right now in #Brentwood – have counted 6 homes on fire and there’s likely more. The #GettyFire continued to burn out of control in the hills of Brentwood. Stay with @ABC7 for live coverage pic.twitter.com/u8IZM9eN1c

LeBron James said he was among those forced to evacuate from his home overnight.

My best wishes as well to the first responders⛑ right now doing what they do best! 🙏🏾💪🏾

“We’ve seen fires and tragedies were people have believed they could stay,” Garcetti said. “Do not do that. The only thing you cannot replace is you and your family.”

Roughly 25,000 people live in the evacuation zone, the mayor said.

Natalie Rodriguez, a nursing student at Mount Saint Mary’s University in Los Angeles, said she woke up to the smell of smoke just before 2 a.m.

“Even inside the dorms it was very smoky and it was hard to breathe,” Rodriguez told ABC News. “You could feel the heat from the flames that were so close to us on the other side of the mountain.”

“It was just a very scary experience,” she said. “Something that I didn’t think I would ever have to experience.”

As she and her roommates fled campus, the sky was bright orange — even though it was the middle of the night. Rodriguez said she safely evacuated to her family’s home.

The origin of the quickly spreading blaze is under investigation but Garcetti said it was not caused by homeless encampments.

Officials warned that the blaze won’t come to an end on Monday. Throughout the day, the conditions in Los Angeles will be extremely dangerous for fire growth.

Wind gusts reached 66 mph in the Los Angeles area early Monday and could reach 50 mph through the evening, Red flag warnings are in effect through the day.

Gusty winds and dry conditions can cause an existing fire to behave erratically and any spark could quickly expand into a major blaze.

Winds are expected to die down in Southern California on Tuesday before returning on Wednesday.

The Getty Fire is just one of the dangerous blazes burning in the Golden State.

In Northern California, the monster Kincade Fire has been burning since Wednesday night and has consumed over 66,000 acres in the heart of wine country.

Nearly 200,000 people have evacuated as the massive inferno rages on. Rough winds, which peaked at 102 mph, contributed to the Kincade Fire rapidly growing over the weekend. Containment fell from 10% to 5%.

Ninety-six structures have been destroyed and tens of thousands are still threatened.

Over 4,000 firefighters are battling the blaze, and two firefighters suffered burn injuries, including one seriously.

All Sonoma County public schools are closed Monday and Tuesday.

Current look at the #kincadefire right now. We’re currently in Windsor where the fire is quickly spreading. @ABC10 pic.twitter.com/EIZcmtD5ix

Winds are forecast to weaken in Northern California on Monday, giving fire crews a chance to tackle the massive blaze. But critical fire conditions are expected to return to the region on Tuesday and Wednesday, bringing gusts up to 40 mph.

Trump-Biden transition live updates: Giuliani plans presentation in Pennsylvania
GOP has to ‘get back to policies and ideas’: Rep. Denver Riggleman
Spending Thanksgiving alone this year? Here are five tips to combat loneliness
Mike Tyson returns to the ring, but this time, he’s a different man
Duchess Meghan describes ‘pain and grief’ after suffering miscarriage in July
Restaurant near White House flooded with donations to keep feeding homeless