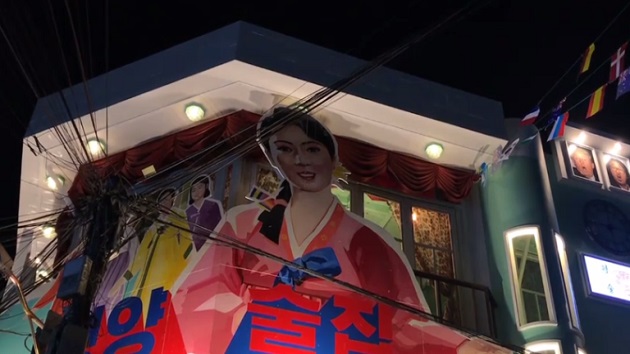 ABC News(SEOUL, South Korea) — A North Korean-themed pub opened Wednesday in the busiest district of Seoul, South Korea, and now visitors can drink beer with fake North Korean labels and snack on tofu-wrapped rice, a traditional North Korean junk food.With friends and colleagues, customers can enjoy the culture of the forbidden country.Pyongyang Pub is located in Hongdae, a nightlife hangout area of South Korea’s capital, and it sticks out among the other bars and cafes. Although restaurants have served North Korean dishes, this is the first pub fully decorated in North Korean style.The walls are mint and pink, and posters with phrases written in white letters on red background in the style of North Korean propaganda posters adorn the walls.The posters at first may confuse passersby as they seem so realistic, but a closer look reveals the posters feature satirical phrases like “let there be more consumption of goods” or “more drinks for fellow comrades.””I think the place seems very real,” Ji-eun Hyun, 23, who had never eaten North Korean food before, told ABC News while she checked out the pub. “This is my first time encountering such a unique place.”At the entrance of the pub is a small section decorated as an imitation of North Korean shop with products actually from the North. It displays real North Korean beer bottles as well as cigarettes, candy and snacks. There are also traditional Korean clothes that people can try on and take pictures in.”I wanted to do something new and thought North Korean theme bar would appeal to young people,” the owner, who asked to be referred to as Kim, said. “I expect people will be curious over this place that many want to visit.”Controversy arose when local media first reported on the construction of the bar, showing it had portraits of former leaders of the North. The portraits were eventually taken down — and replaced with pictures of President Donald Trump and of a local comedian.Even so, the pub faced protests out front as it started a soft opening.”I didn’t expect to have a negative perspective on the North Korean theme; I hope people to have fun here” Kim said.”The majority of South Koreans seem indifferent to North Korea.” Ki-chul Jang, a man in his 50s who visited with his friends, said. “I think this pub will arouse curiosity in North Korea’s culture and people.”