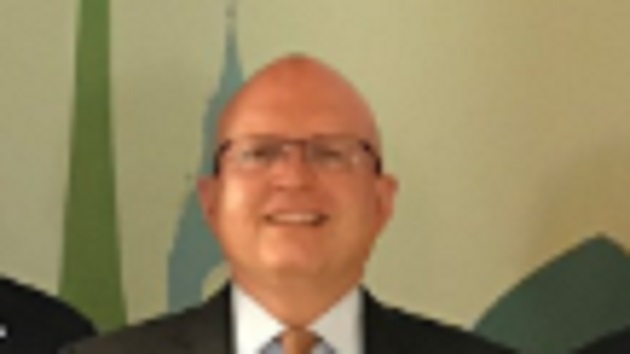 Twitter/@statedeptspox(WASHINGTON) — Philip Reeker, the acting Assistant Secretary of European and Eurasian affairs and a former ambassador, appeared with his lawyer on Saturday for a nearly nine-hour, closed-door interview with the three House committees leading an impeachment inquiry into President Donald Trump after, according to documents previously obtained by ABC News, he had been subpoenaed. In testimony on Saturday, Reeker said he thought there was no credence in the attacks on the former U.S. ambassador to Ukraine, Marie Yovanovitch, a source with direct knowledge of his testimony told ABC News.Reeker, flanked by security as he left his deposition, did not answer questions from reporters.Reeker began his current position in March, around the same time claims began swirling against Yovanovitch. Sources familiar with the matter told ABC News the committees asked Reeker questions about the former ambassador.According to emails turned over by the State Department to its inspector general and obtained by ABC News, Reeker forwarded emails in March to Ulrich Brechbuhl, a top adviser for Secretary of State Mike Pompeo, about attacks against Yovanovitch while she was still ambassador.For months, Trump’s personal attorney, Rudy Giuliani, and his associates have accused Yovanovitch of blocking investigations into Democrats by withholding visas and giving the prosecutor general a list of officials not to prosecute, despite the fact that career state department officials dismissed those claims as false.In one of the forwarded emails, Deputy Assistant Secretary George Kent called those accusations a “fake news-driven smear campaign” led by Giuliani and his associates. Kent testified as part of the impeachment probe on Oct. 15.In an email to Brechbuhl, who serves as the State Department counselor, Reeker called the accusations against Yovanovitch a “fake narrative” that was “really … without merit or validation.”On two other occasions, as Yovanovitch was being attacked in conservative U.S. media, Reeker forwarded Brechbuhl information gathered by State Department officials to counter the allegations. In one case, the subject line was, “Ukr[aine] fake news smear: Thursday Updates.”Nevertheless, Trump recalled her from her post early and called her “bad news.”When asked about the testimony and if Reeker is cooperating, House Foreign Affairs Committee Chairman Eliot Engel told reporters Saturday that, “I’m not allowed to say, but I think it’s interesting. I’ve known [Reeker] for a number of years, and think he’s being honest [about] what he’s observed.”Republicans who spoke with ABC News said no major news came from Saturday’s testimony.Rep. Scott Perry, R-Pa., said Reeker was relatively new in the position and “that there’s no great revelations, so far today. I haven’t heard anything that’s going to make any movement significantly in either direction … there’s no bombshell.”Rep. Mark Meadows, R-N.C., echoed his Republican colleague’s sentiment. Instead, he said this is another attempt by Democrats to attack Trump.”The American people are seeing this for what it is, and this is a swing-and-a-miss from the Democrats originally on Robert Mueller and the rest in collusion,” Meadows told reporters Saturday.According to Meadows, Reeker did not give any “incriminating evidence that would suggest an impeachable offense, in fact, quite the opposite.””It was a good day for the president,” he added.An official working on the impeachment inquiry told ABC News the State Department had sought to interfere in Reeker’s deposition.”In light of an attempt by the State Department to direct Amb. Philip Reeker not to appear for his scheduled deposition, and efforts by the State Department to also limit any testimony that does occur, the House Intelligence Committee issued a subpoena to compel his testimony,” the official told ABC News in a statement. “As is required of him, Ambassador Reeker is now complying with the subpoena and answering questions.”ABC News obtained both the letter and subpoena sent to Reeker.Reeker, deposed as part of the inquiry, had remained out of the spotlight of the impeachment saga until he was subpoenaed by the House committees. He appears as the latest in a line of career diplomats who have complied with a House subpoena and defied White House orders not to comply.As the top U.S. diplomat for Europe, Reeker was communicating with key officials who were either part of the efforts of Trump and Giuliani to have Ukraine launch investigations that would favor him politically, or were swept up in that effort. Reeker also was communicating with Pompeo and his top aides and may be able to shed more light on what Pompeo knew.Giuliani was working with former special envoy for Ukraine Kurt Volker and the U.S. ambassador to the European Union, Gordon Sondland, to press Ukraine’s new president, Volodymyr Zelenskiy, and his advisers to open investigations into the Ukrainian energy company Burisma and former Vice President Joe Biden’s son, Hunter, as well as into a conspiracy theory about Ukrainian interference in the 2016 election.At the heart of the impeachment inquiry is whether launching those investigations was a precondition for Trump to meet with Zelenskiy and release $391 million of military assistance to the country as it battles Russian-led separatists in its eastern provinces.Reeker has been a Foreign Service officer since 1992 under Republican and Democratic administrations and was made acting assistant secretary in March by Pompeo. Reeker received the nomination for and became ambassador to Macedonia under President George W. Bush and previously served as deputy assistant secretary for Europe and deputy spokesperson for the department.Copyright © 2019, ABC Radio. All rights reserved.