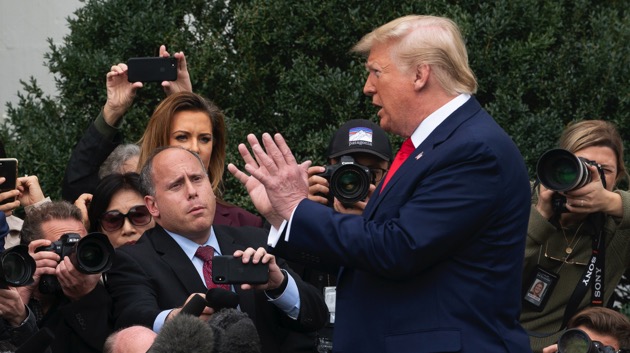 Official White House Photo: Joyce N. Boghosian(WASHINGTON) — President Trump on Monday said he is considering releasing video of the U.S. raid in which ISIS leader Abu Bakr al-Baghdadi was killed over the weekend.“We’re thinking about it. We may,” he said, speaking to reporters at Joint Base Andrews on his way to a speech in Chicago. “The question was: Am I considering releasing video footage of the raid? And we may take certain parts of it and release it, yes,” he said.The president also defended not informing congressional leaders of the raid beforehand, saying, “I’ve watched Adam Schiff leak” – referring to the House Intelligence Chairman who is leading the impeachment in inquiry against him, calling him a “corrupt politician” and “the biggest leaker in Washington.”On Sunday, when announcing the raid and al-Baghdadi’s death at the White House, Trump said that watching a live feed from the scene of the operation was like watching “a movie.”This is a developing story. Please check back for updatesCopyright © 2019, ABC Audio. All rights reserved.