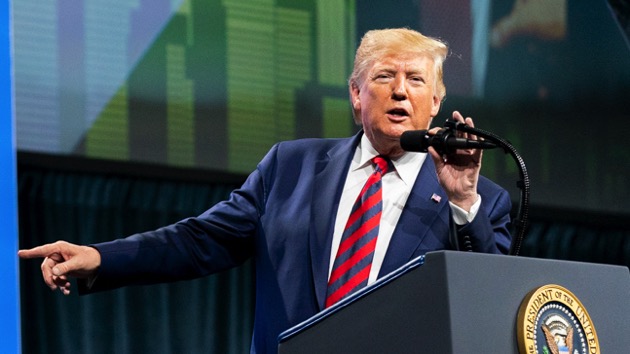 Official White House Photo: Shealah Craighead(WASHINGTON) — President Donald Trump on Tuesday attacked a White House National Security Council official as a “Never Trumper” just before he was to tell House impeachment investigators he raised alarms about what Trump told Ukraine’s president during a July phone call.Army Lt. Col. Alexander Vindman, the National Security Council’s Director of European Affairs, arrived on Capitol Hill Tuesday morning ahead of a closed-door deposition as part of the House’s impeachment inquiry. Vindman, who listened to the phone call between Trump and Ukrainian President Volodymyr Zelenskiy, became the first current White House official to testify in the probe despite a blanket White House directive against doing so.”Supposedly, according to the Corrupt Media, the Ukraine call ‘concerned’ today’s Never Trumper witness,” Trump tweeted. “Was he on the same call that I was? Can’t be possible! Please ask him to read the Transcript of the call. Witch Hunt!”

Supposedly, according to the Corrupt Media, the Ukraine call “concerned” today’s Never Trumper witness. Was he on the same call that I was? Can’t be possible! Please ask him to read the Transcript of the call. Witch Hunt!

Trump has repeatedly lambasted these officials sitting for depositions as “Never Trumpers” – he called the United States’ top diplomat in Ukraine, Bill Taylor, one, too – despite the fact that there’s no evidence they have political biases against Trump and despite both officials having long records of service for the United States.Vindman planned to tell House impeachment investigators that he was “concerned by the call,” according to a copy of his opening remarks obtained by ABC News.”I was concerned by the call. I did not think it was proper to demand that a foreign government investigate a U.S. citizen, and I was worried about the implications for the U.S. government’s support of Ukraine,” Vindman planned to say.Vindman immigrated to the United States from Ukraine as a child, has served in the Army and was wounded in an IED attack in Iraq, and received a Purple Heart.Despite Vindman’s career serving in the U.S. military and government, conservative defenders of the president attacked Vindman’s loyalty by focusing on his heritage.”We also know he was born in the Soviet Union, immigrated with his family, young,” “Fox and Friends” host Brian Kilmeade said Tuesday morning. “He tends to feel simpatico with the Ukraine.””It seems very clear that he is incredibly concerned about Ukrainian defense,” former U.S. Rep. Sean Duffy, a Republican from Wisconsin, said on CNN Tuesday morning. “I don’t know that he’s concerned about American policy, but his main mission was to make sure that the Ukraine got those weapons. I understand that. We all have an affinity to our homeland where we came from.”Responding to a question from a Fox News host Monday night that broached Vindman’s Ukrainian background, John Yoo, a former Justice Department official under President George W. Bush, said that “some people might call” Vindman’s interactions with Ukrainian officials “espionage.”Vindman was not the first official Trump has lambasted as a “Never Trumper” despite citing no evidence showing they harbor any political biases against the president.On Friday, Trump told reporters at the White House that Taylor was “a Never Trumper and his lawyer is a Never Trumper.” He did not provide any evidence to support his claims.Both Vindman and Taylor are current U.S. officials, the latter called to serve in Ukraine by Secretary of State Mike Pompeo, who was nominated by Trump. Vindman is a current official on the Trump administration’s National Security Council.They have both served under both Democratic and Republican administrations.Trump on Friday blamed Pompeo for hiring Taylor. “Hey, everybody makes mistakes,” the president said. “Mike Pompeo. Everybody makes mistakes. He’s a Never Trumper. His lawyer’s the head of the Never Trumpers. They’re a dying breed but they’re still there.”Trump has also invoked espionage to refer to those who have raised questions about his dealings with Ukraine.“I want to know who’s the person who gave the whistleblower the information because that’s close to a spy,” Trump said at the U.S. Mission to the United Nations last month. “You know what we used to do in the old days when we were smart with spies and treason, right? We used to handle it a little differently than we do now.” Copyright © 2019, ABC Audio. All rights reserved.