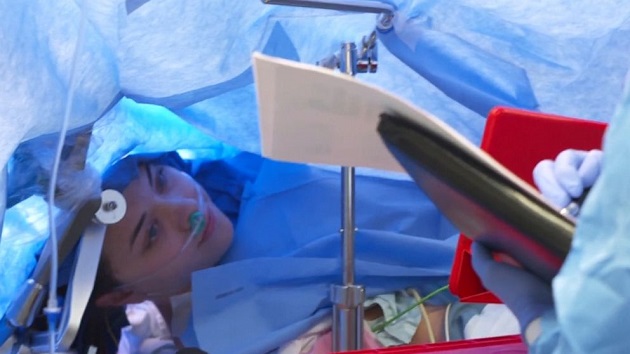 Methodist Dallas Medical Center(DALLAS) — A Dallas hospital was inundated with social media praise on Tuesday after it livestreamed a surgery, showing doctors operating on a young woman’s brain while she was awake and speaking.Jenna Schardt underwent surgery at Methodist Dallas Medical Center in order to remove a mass of blood vessels in her brain that affected her speech and caused seizures. Schardt, a 25-year-old graduate student in occupational therapy, said she agreed to let the hospital livestream the surgery on its Facebook page in an effort to “educate and inspire” others.”They are going to show me pictures and I will be describing the pictures while they map out my brain,” Schardt said in a statement released by the hospital ahead of the surgery. “I will be a very active participant in my own brain surgery!”Doctors said they conducted the surgery while she was awake so they could test her brain to help avoid damaging key neurological functions.”Jenna’s lesion is around some very critical areas in her brain,” neurosurgeon Randall Graham said. “What’s nice is, nowadays, we can have people awake during the surgery to test on the surface of the brain to make sure we don’t do anything to affect her speech or motor skills.”The livestreamed portion of the surgery lasted for about 50 minutes, racking up more than 63,000 views, comments and reactions on Facebook in just a few hours. The doctors also walked viewers through the process and answered questions in real-time.Many Facebook users said they were amazed by the doctors’ ability to operate on a patient while awake. Others said it brought them great comfort to see a young woman braving through such an invasive experience in front of the world.”Watching this surgery has given me hope about my future similar left temporal lobe surgery. What a terrific team of Drs,” one Facebook user said.”Thank you for allowing us all to witness this surgery. It was definitely something special.” another user added.The hospital shared images of Schardt from the operating room after the surgery, showing her smiling and offering a thumbs-up with her parents beside her hospital bed.”Our first look at Jenna after brain surgery! She’s still smiling like she was in the operating room,” the caption said. “Jenna and her parents want us to thank everyone for the prayers and support.”Her family said Schardt was “doing fantastic” afterward.”She is poised and she is just feeling great. She’s tired, but she said, ‘I don’t feel like I just had brain surgery,"” her mother said during a post-operation press conference. “This is who she is. The first thing she said is, ‘If I have to go through this, I want as many people to benefit from it as possible.’ And that comes straight from her heart.”