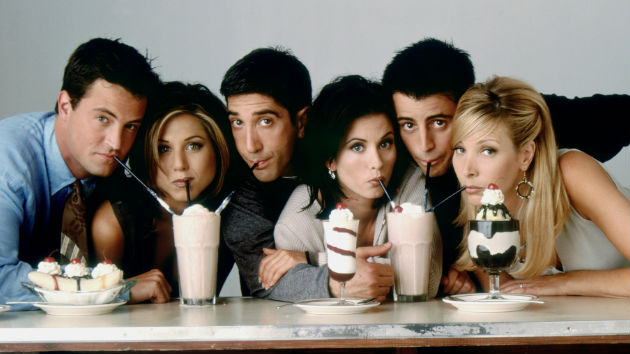 Warner Bros. Entertainment Inc.(NEW YORK) — Could there be a Friends movie in the works?  Jennifer Aniston insisted a reboot of her classic sitcom Friends is not happening, but conceded she and her former castmates are “working on something.”

The subject arose during an appearance on The Ellen DeGeneres Show on Monday, when DeGeneres pressed the Morning Show star about her recent Instagram post that reunited the entire Friends cast — Courteney Cox, Lisa Kudrow, Matt LeBlanc, Matthew Perry and David Schwimmer — for the first time in years.

“Is there going to be a reunion?” Ellen asked point blank.

“Like a reboot of the show?” Aniston asked before delivering a flat “No.”

“We would love for there to be something,” she continued,”but we don’t know what that something is. We’re trying. We’re working on something.”

“I don’t know yet,” Jen said, stammering, as if maybe she was holding something back.

So why were the Friends actors all hanging out together?

“We did that because we miss each other and we happened to be in the same part of the world,” the 50-year-old actress offered, rather unconvincingly.

However, the answer didn’t fly with Ellen, or her other guest, Charlie Puth, who said, “Sounds to me like there’s something in the works.”

When Ellen pointed out that it had been years since their last reunion, Aniston fudged her answer, quipping “day, months or even a year,” referencing the lyrics to the Friends theme song.

We’ll just have to wait and see, but in the meantime, you can catch Jen on her new Apple TV+ series Morning Show, debuting on Friday.

“Everyone is fascinated with bad guys”: Christian Bale goes from Batman to “butcher” in ‘Thor: Love and Thunder’