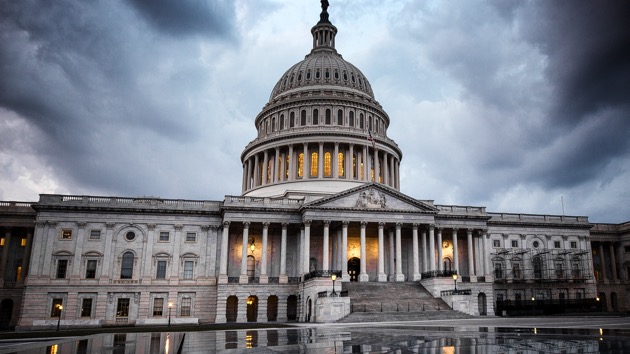 uschools/iStock(WASHINGTON) — The full House of Representatives on Thursday morning began debating a resolution to authorize the ongoing impeachment inquiry ahead of a showdown vote later in the day, taking a pivotal new step in the process to investigate President Donald Trump’s dealings with Ukraine.The vote is the first time members of the House will formally go on record to support or object to the ongoing impeachment inquiry.Democrats have indicated they expect enough support to approve the resolution, even though most or all Republicans are expected to vote against it.But Democrats weren’t celebrating the step as they kicked off debate Thursday morning.”This is a sad day for our country,” Rep. Jim McGovern, D-Mass., and chairman of the House Rules Committee, said.

"Article One of the Constitution gives the House the right to investigate the president, and we are taking our responsibility seriously," Dem. Rep. Jim McGovern says after accusing the White House of obstructing House impeachment inquiry. https://t.co/OzrDAzDZ9Y pic.twitter.com/i1g0qwwIB3

“For all the disagreements I have with President Trump, for all his policies, his tweets, and his rhetoric that I deeply disagree with, I never wanted our country to reach this point. I do not take any pleasure for the need of this resolution,” he said. “We are not here in some partisan exercise. We are here because the facts compel us to be here. There is serious evidence that President Trump may have violated the Constitution.”The White House and Republicans have demanded a formal vote to authorize the inquiry, calling the proceedings so far illegitimate even though congressional committees have the authority to subpoena witnesses and documents as part of an investigation.But Republicans slammed the vote Thursday, saying they still see it as a partisan process and a “show trial” meant to attack the president.

Rep. Devin Nunes at debate on impeachment inquiry resolution: "We now have a full-fledged impeachment committee in the basement of the Capitol. Think about that, America." https://t.co/SsbT0h2n87 pic.twitter.com/PvtPdZxna8

This has been their plan from Day 1,” Intelligence Committee Ranking Member Rep. Devin Nunes said, condemning the Democrats’ “bizarre obsession with overturning the results of the last presidential election.”“We now have a full-fledged impeachment committee in the basement of the Capitol,” Nunes said. “Think about that, America.”The resolution being considered Thursday would authorize and lay out guidelines for the impeachment inquiry, including public hearings, but is not a vote on whether or not members think the president should be impeached. Copyright © 2019, ABC Audio. All rights reserved.